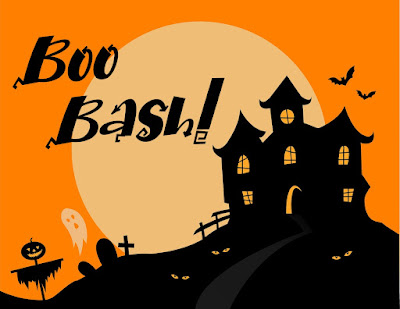 I'm finally getting around writing up my Halloween programs from last month! I have been super busy and super exhausted for the last two months, and feeling rather uninspired. But, here they are, finally.

The programming survey I conducted at the end of the summer indicated that people really wanted more holiday and seasonal special programs, so I planned a "Boo Bash" for the 5 & under crowd. My co-worker was also doing a Halloween program for the teens and tweens, so I decided to add a "Spooky Stories" program for the elementary kids, so there would be something for every age.

I scheduled the elementary program for the evening, and envisioned re-creating the feel of
telling scary stories around a campfire, followed by s'mores and a take-home craft kit. I created a fake campfire with cardboard tubes covered in woodgrain contact paper, twisted and scrunched to look more realistic, and a lot of hot glue to hold them in place. I filled the center with scrunched up pieces of red, yellow, and orange cellophane, and glued a few small bunches of tissue paper in those same colors for the flames. Finally, I took a dozen electric flickering tea lights and tucked them in the cellophane all around. It turned out really well.

Sadly, the program itself did not go that well. I only had a handful of kids show up, primarily for the snacks, which I had changed to a s'mores snack mix bar rather than traditional s'mores after deciding that it would be too difficult to manage making real s'mores without another staff member to assist. The stories I chose were evidently not spooky enough, the older kids were not engaged at all, and were talking and snickering amongst themselves, and one kid in particular was being extremely obnoxious and disruptive. I tried letting them take turns telling spooky stories, which they just used to make jokes at their friends' and siblings' expense. It turned out to be an exercise in frustration, and something I will never do again. 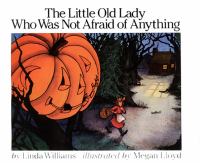 Fortunately, the "Boo Bash" was a big success! It was essentially a storytime with extra activities. I started out with a hello song, then read my favorite Halloween book, The Little Old Lady Who Was Not Afraid of Anything by Linda Williams and Megan Lloyd. This book is so much fun to read aloud, and it's the one book I never get tired of doing over and over. The repetition invites audience participation, and I love being able to scare them just a little with the "Boo" towards the end. It's also nice in that it doesn't specifically mention Halloween, and doesn't contain witches or magic, so has broader appeal.

I followed that with "Five Little Pumpkins" and "Little Ghost", with everyone using a tissue for their little ghost.

Five little pumpkins sitting on a gate.
The first one said, "Oh my, it's getting late!"
The second one said, "There are bats in the air."
The third one said, "But we don't care!"
The fourth on said, "Let's run and run and run!"
The fifth one said, "It's Halloween fun."

Then WOOSH went the wind, and OUT (clap) went the light.
And the five little pumpkins rolled out of sight!. (roll arms) 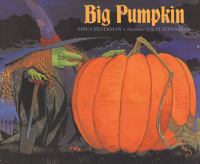 I followed that by reading my second favorite Halloween book, Big Pumpkin by Erica Silverman. I love this book for the repetition, the lesson in cooperation, and because it shows several traditional Halloween spooks and characters in a non-scary way.

Then it was time for trick-or-treating around the library! I led the kids in a loop, starting at the children's service desk, then through the back staff area, back out to the circulation desk, then back to the children's area, with 4 treat stops in total. The older kids got a kick out of being allowed in the "secret" staff areas. For treats we gave out a goody bag with a pencil, sticker pack, stamp, and fruit gummies; mini cereal bars, white chocolate mini candy bars, and another goody bag with bubbles, slap bracelet, and novelty squishy eraser. Note: I also provided large trick or treat bags for those who did not bring anything, which was much appreciated.

Once back in the children's area we went into the program room for crafts/activities. I had 4 stations set up: (1) craft foam pumpkins with stickers to make faces, (2) dot painting, (3) classic lollipop ghosts, and (4) a fall/Halloween sensory bin fill with colored shredded paper and acorns, mini pumpkins, small pine cones, plastic spiders, and plastic skulls mixed in. There were also large jack o'lantern cardboard cutouts for photo ops.

Thankfully this program was well-attended and went really well. Everyone seemed to have a great time, and the kids were all really cute in their costumes and Halloween outfits. The only downside was that one person grabbed extra sticker sheets to take home (I only realized in hindsight what they were doing), which meant 3 kids didn't have stickers to make faces on their pumpkins and had to use markers. Luckily, they were all on the younger side so didn't realize they were missing out on anything. 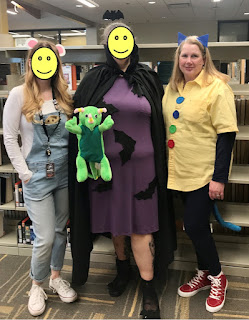 And here I am dressed as Pete the Cat, with my staff Ms. Frizzle (from The Magic School Bus: Going Batty by Joanna Cole & Bruce Degen) and Mouse (from If You Give a Mouse a Cookie by Laura Numeroff & Felicia Bond).

[I like the idea of costumes, until it comes time to try to put one together! I find commercial costumes to be cheaply made, poorly fitting, hot, and uncomfortable, so I try to put something together using regular clothing, and my co-workers did the same.

My costume was navy blue leggings & long-sleeved t-shirt from Wal-Mart, the cheapest red hi-top sneakers I could find (Amazon), yellow button-up shirt from Goodwill, ears cut from felt and stapled to headband I already had, buttons cut from felt and safety-pinned on, and tail from Amazon. I spent more than a Pete costume would have cost, but I guarantee I was more comfortable, and the individual pieces can be worn again for everyday, except the ears and tail of course.]