Like most kids, I was always fascinated with dinosaurs, and still am.  I had a serious interest in paleontology and briefly considered it as a career, but knew jobs would be very limited and realized that spending long hot days digging in the dirt would not be that much fun in reality.  But I still love dinosaurs and take pride in being able to say all the names.  Did you know there is one whose name was inspired by the Harry Potter books?  Dracorex hogwartsia. 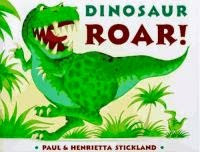 After our welcome song and lead-in song, we started off with Dinosaur Roar! by Paul and Henrietta Strickland.  This book has great illustrations with short, simple text showing contrasting characteristics, such as "Dinosaur big, dinosaur small" and is great for a younger audience with short attention spans.  Next, we sang a really fun action song to the tune of "Doo Wah Ditty" called "Dino Ditty": 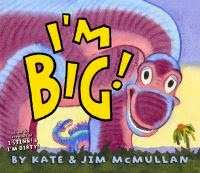 Next we read Kate and Jim McMullan's I'm Big!  This is a great interactive story about a supersaurus who overslept and got separated from his herd and is searching for them.  When the main character encounters predators, he asks the audience whether he should run, hide, or fight.  In the end he recognizes footprints like his own and the kids help him follow them to find his friends.  The pictures are engaging and the text just right for this age.  To transition to the following action rhyme, we briefly talked about the different types of dinosaurs show in the story and how some could swim or fly.  Then we were ready for the rhyme:  "Dinosaurs"

I followed that up with the song "Ten Big Dinosaurs" (to the tune of "Ten Little Indians"): 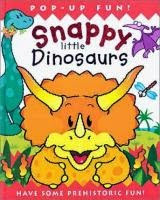 Then for a big finish, Snappy Little Dinosaurs by Dugald Steer.  This awesome pop-up book is guaranteed to be a big hit (unfortunately it is out of print).  The brightly-colored pop-ups are accompanied by a charming rhyming text describing each dinosaur, along with the dino's name and a pronunciation guide.  We ended with our usual closing song, and I gave them all a dino hand stamp.

How It Went
Predictably, the kids loved the dinosaur theme as much as I did.  They got a little rambunctious, but you can't do a topic like dinosaurs and expect them to sit still and be quiet :)  It was all in good fun, though, and they were totally engaged the whole time.  Dinosaur Roar! was probably a little too short and simple for them, but they still liked it.  They really liked I'm Big! and of course went crazy for the pop-ups in Snappy Little Dinosaurs!  They shrank back and screamed in mock terror as I turned the page and each new pop-up dinosaur appeared. After I read the text on each page, I told them the dinosaurs name and had them repeat it after me, and they did a great job.

"Dino Ditty" was a big hit  and we all had fun with it (except for one contrary little boy who said "No" when I commented "That was a fun song, wasn't it?").  They liked it so much that I had to ask a couple of them to stop singing it to themselves during the story following it.  Next time I will have to come up with at least one more verse for that song, since we all liked it so much and they obviously weren't quite finished with it.  They participated well with the "Dinosaurs" action rhyme and the "Ten Big Dinosaurs" song.  Of course the dinosaur hand stamp at the end was a HUGE hit.

The biggest compliment was when I noticed the teacher was gathering up stuff during storytime, and as we ended it became apparent that she had gotten out some dinosaur coloring sheets and a dinosaur memory game that they happened to have in order to extend the lesson I had started.  This was such a fun storytime and there are so many cute songs and rhymes it was hard to decide on just 3 to use.  I would LOVE to do a longer, all-out "Dinosaur Stomp" program someday with more songs and some dino activities and/or crafts as well.
Posted by Jen at 12:01:00 AM