As the weather warms up and we get closer to summer, what do we see more of besides flowers?  Bugs!  Creepy, crawly, buzzy, fluttery bugs.   There are a number of cute books about bugs or starring buggy characters, and so many cute songs and rhymes it makes it hard to decide which ones to use.

As always I started with our welcome song, but since the kids have been extra wiggly lately with the warmer weather, I decided not to go straight into our "story song" after the introduction.  Instead, I added a fun song that fit today's theme and has lots of movement that I found at Sunflower Storytime:

Below is a video of an adorable little boy demonstrating this song with all the movements: 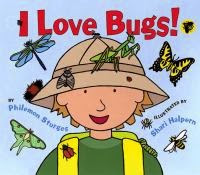 I encouraged them to be sure and do lots of wiggling and get ALL their wiggles out.  Then we went on to our usual "story song" to which I added some bug-related verses, like flap your wings, wiggle your antennae, and ending with sitting down, then saying "Shhhhh".  Now we were ready for our first book, I Love Bugs! by Philemon Sturges.  I like this book because it is short and simple, with graphic illustrations and covers a number of different bugs.  I also like that it had pictures with the name and a short fact about each bug shown in the story in the endpapers.  Emma Dodd also has a great book with the same title, but I chose the Sturges one because it was a little shorter and had clearer illustrations.
To lead into the next book about a bee, I asked them which bugs help us by pollinating flowers and making honey.  After they said "Bees!" I told them I had a great little rhyme about bees and did the classic childhood fingerplay "Here Is The Beehive": 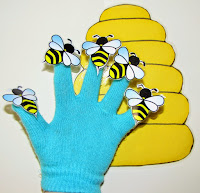 I borrowed the idea and printable art for making a simple puppet with a glove and five clipart bees that I cut out & laminated, along with the beehive, to go along with this rhyme from Sunflower Storytime.  I couldn't find any gloves this time of year, so had to make due with one I found laying around the house.  I also couldn't get velcro dots in time, so made due with tape for the time being.  But this would be a great way to complement other "5 Little..." rhymes. 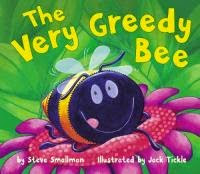 Then we read a funny story about The Very Greedy Bee by Steve Smallman.  I loved this story about the selfish, greedy bee who hogged all the pollen and nectar for himself and became so fat he couldn't fly and had to depend on the kindness of strangers to get home.  It was slightly on the longer side, but I thought the kids could handle it if I kept the other stories short, especially since the dialog is pretty animated and expressive.  The illustrations are cute, and it sneaks in a lesson about sharing and kindness as well.

Next we transitioned into talking about caterpillars and butterflies and did the action rhyme "Roly-Poly Caterpillar": 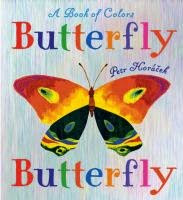 After that we read Petr Horacek's Butterfly, Butterfly, which follows a young girl as she hunts for her friendly butterfly and discovers other creatures along the way, and ends with a lovely pop-up butterfly.  This would also be a good book to use with a color or summer themed storytime.  Then we ended with our usual closing song.

It went really well, other than me starting out a little flustered because there was a traffic accident on the way & I had to take a detour and was afraid I would be late.  I got there on time, but the distraction made me blank on one of the lines of the "Move With Me" song and I had to grab my cheat sheet.  That has never happened to me before!  The kids enjoyed the song, and incorporating some bug movements into our usual "story song", and the extra movement seemed to help them be more settled. They were really engaged today and did a great job listening without interrupting too much.  We are still working on the raising-hands to speak, without the accompanying "Me, me, me, me!" :)

At first they were all "Ewww" when I introduced the topic of bugs, but then I reminded them that not all bugs are creepy-crawly, and that some are beautiful and some are helpful and we talked about bugs that we like.  They thought the boy in the I Love Bugs! was a little weird for loving bugs, but they seemed to enjoy it and I liked the bit of factual information in the endpapers.  The Very Greedy Bee was a huge hit; they loved it as much as I do.  They laughed hysterically when I made the slurping and burping noises, were appalled at the bee's selfishness, and worried when he saw the glowing eyes of a monster that turned out to be friendly fireflies (or lightning bugs as we say around here).  They were glad he got home and learned to share and everyone had a party to celebrate.  They were not as excited by Butterfly, Butterfly, but still listened and named the colors and the bugs Lucy found as she looked for the friendly butterfly.

The kids absolutely loved the bee puppet, especially at the end when I "buzzed" all of them and they shrank back in feigned terror.  It really enhanced the rhyme and I plan to make an upgraded version soon, and try to think of other things I can use it with.  They did fine with the "Roly-Poly Caterpillar", but I wish now I had taken a little more time to talk about the whole metamorphosis process a little more.  I also wish I could have come up with a really good prop for this one; maybe next time!  At the end, one sweet little boy asked me if I could stay and go outside with them.  Sadly, I had to go straight to work.
Posted by Jen at 3:49:00 PM