All the talk about the New Horizons probe taking photos of the surface of Pluto this month inspired me to choose "space" for today's preschool storytime. 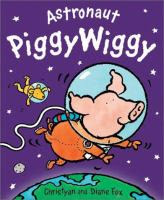 As usual, we started with our welcome song, introductions, and story song.  The first book I chose to read was Astronaut Piggy Wiggy by Christyan and Diane Fox.  I chose this book because it was shorter than some others and encourages kids to use their imagination and dream about what they would like to do someday, and it had a countdown the kids could participate in.  I really liked the illustrations because they were not too busy, had bold, bright colors, with a heavy black outline.  Simple, high contrast pictures are easier for kids to see clearly, and they hold their attention better.

After that, we got to pretend to be an astronaut, and work on counting backwards from 10 to 1, with the action rhyme "Climb Aboard":

For our second book, I wanted something a little different, that didn't have to do with rockets, so I chose Eric Carle's Papa, Please Get The Moon For Me after someone recommended it to me.  Of course it has beautiful illustrations and some neat fold-out pages.  This is a good book to introduce the phases of the moon, as well.

The we sang a song about going to the moon, to the tune of "Farmer In The Dell": 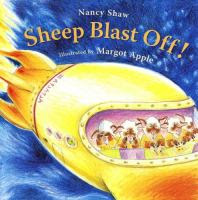 For our last book I read Sheep Blast Off! by Nancy Shaw.  I love these silly sheep, and so do most kids.  This was a cute, slightly silly story where the sheep get themselves in trouble by sneaking aboard a spaceship belonging to visiting aliens.  I also like the rhyme and rhythm of this book.  I'm convinced the kids are drawn in and listen better when books have a rhyme & rhythm, and I just find them easier to read and memorize as well.

We ended with our closing song and stickers.

How It Went
I was not as well-prepared as I like to be as it has been a crazy busy week, and I did not make my final book and song/rhyme selections until the night before, so I really felt like I was winging it.  But it went fine other than me forgetting which verse we were on of the "Flying To The Moon" song once.  The kids were a little more hyper and talkative today for some reason, and required more correction, but they did like the topic.  Several of them insisted they had their own rocket ships at home.

They seemed to enjoy all the books, but sat and listened the best for Sheep Blast Off!.  They liked the Eric Carle book more than I thought they would, and were very impressed with the huge fold-out moon and Papa's very, very long ladder.  The thought Piggy Wiggy's space pajamas were silly for some reason.

They loved the "Climb Aboard" rhyme, especially the blast off, of course.  Some of them had a little trouble with counting backwards from 10, so I will have to try to incorporate some more activities in the future that have counting down.