Here are the various songs and rhymes I used for my "Feelings"-themed storytimes, plus the felt pieces and props I made to accompany them.  Of course we couldn't do the theme of "Feelings" without singing the classic "If You're Happy And You Know It":

I also had these "faces-on-a-stick" I made using the printable faces shared by Leah at Sunflower Storytime that I sometimes held up to indicate which feeling we were doing next. 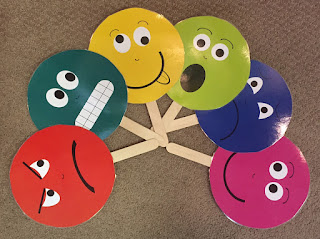 With every group I used these faces for another activity.  First I would ask the kids how you can tell what someone is feeling.  I was surprised at how much prompting it took to finally get them to say something along the lines of "looking at their facial expressions"  (and sometimes I had to just say it myself).  Then I would hold up each face and let them guess what the feeling was.  Next, I would ask them to make a face showing how they looked when they felt that way.  (I printed these on cardstock, laminated them, then hot-glued to craft sticks).

The next song goes back to my childhood, when my mother would sing "Ten In a Bed".  I would never have thought to use it for a "Feelings" theme if I hadn't seen Ms. Anna's blog post at Future Librarian Superhero.  She used felt faces to show that at the beginning, the four bigger ones (for this purpose the song is shorted to five) are smiling with eyes closed, sleeping contentedly, while the little one has a grumpy face because he doesn't have enough room.  Then, one by one the felt faces are turned over to show a unhappily surprised face as they roll over and fall out of bed, and at the end the little one is turned over to reveal a contentedly sleeping face.
"Five In A Bed" 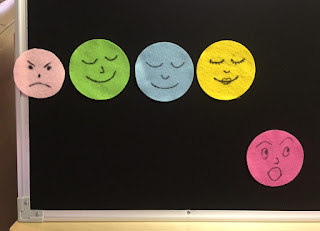 There was one in the bed and the little one said,
"Ahhhhhhhh.  Now I have the whole bed to myself.  Goodnight!"

I saw "Feelings" versions to the tune of "BINGO" on a couple of different blogs (Story Time Secrets and cde.state.co.us) and came up with my own version using some elements of each:

I decided to make felt pieces to go with this, both the letters to spell out the words, and faces to indicate what they were.  I used dies to cut out the letters because it would be much faster and easier, but then when I used them I decided they were too big and floppy.  Eventually I hope to have time to replace them with smaller letters, preferably of stiffened felt. 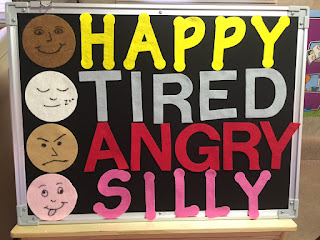 In addition to these structured activities, we also worked in talking about how to express emotions and deal with anger, what makes us feel happy, sad, etc., and how to show empathy for someone who is feeling bad.

How It Went
﻿
The kids loved singing all the different verses of "If You're Happy And You Know It" since it was a song they were familiar with, and they got to do all the actions and facial expressions.  They also really liked all the different faces and naming the emotions and making their own faces.  What kid doesn't like making faces, right?  Some kids were so entranced by the faces, they asked to look at various ones again.  The "Five In A Bed" song went over pretty well, too, and I think having the faces to go with it are what really sold it.  The adults all liked this song as well, remembering it from their childhoods as I did.  Kids today do not seem to be familiar with it, though.

The "H - A - P - P - Y" song seemed like a great idea when I planned it, but in practice, it was a bit too much going on.  It wasn't repetitive enough for the kids to really get the hang of it, and many of them did not have good enough letter-recognition skills to follow along.  I think this would probably work better with a slighter older group, kindergarten to first grade, and when you have time to run through it a few times so they can really learn all the words.

Overall, I think the theme worked really well, though it is one I would have loved to be able to devote more than 25 minutes to so we could spend more time just talking about all the different aspects of feelings and emotions.  The kids REALLY like seeing all the different faces/emojis with different expressions.  So much so that the decorations on the walls of the bus were a bit distracting and over-stimulating to them.  I will cut down on the decorations next time, but try to find a couple more songs or rhymes that I can include face props with.