The Ghost of Christmas Past 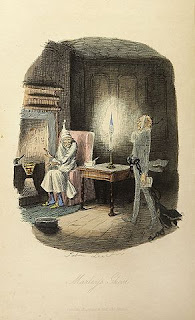 This is the Christmas storytime that I did last year, before I started my blog.  At that time, I was still a storytime newbie with only 3 storytimes under my belt, but I had already learned a lot from those 3 storytimes.  By this point I had established a basic storytime plan with a beginning routine of a welcome song, followed by an introduction, then a lead-in song which has now become known as our "story song". 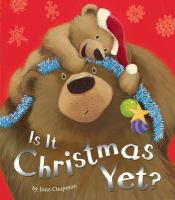 For our first book I chose one that just came out the year before, Is It Christmas Yet? by Jane Chapman.  I really liked the cute story of little Teddy Bear who just can't wait for Christmas, and annoys Big Bear by asking him every few minutes if it's Christmas yet, which most kids (and adults) can relate to.  I fell in love with the illustrations as well, and if they seem familiar, it's because Jane Chapman is also the illustrator of Karma Wilson's Bear books. 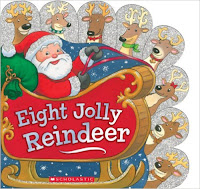 Then, I decided to go straight into a second, short book, Eight Jolly Reindeer by Ilanit Oliver.  They enjoyed counting the turkeys in Ten Fat Turkeys during our Thanksgiving storytime, so I thought they would like counting reindeer as well, and it would be a great lead-in to singing "Rudolph the Red-Nosed Reindeer".

After we sang about Rudolph, then we did an action rhyme about him, 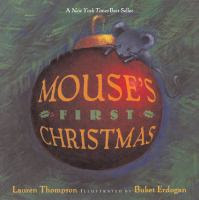 I like how this action rhyme ends with having them sit down, and ready for the next book.  For our last story I chose Lauren Thompson's Mouse's First Christmas.  It has a simple, sweet story of a little mouse exploring around the house on Christmas Eve after everyone else is asleep, showing all the interesting things he finds.  The kids can guess what each thing is; some are easy, but others are a little more challenging.  This works well for younger kids who need something shorter and very interactive.
After that, we closed with a rousing round of "Jingle Bells" and I surprised them by bringing real jingle bells to use with the song.
How It Went
I had a small group today, and the kids just seemed a little off and out of their normal routine.  Usually they crowd too close to me, but today they were all spread out way too far away and didn't really want to participate much and didn't seem that excited about Christmas like I expected.

I also had a heated argument break out between two of the kids as we were talking about Christmas and traditions during the introduction.  I never could quite figure out exactly what the point of contention was, only that it had something to do with chicken and they both felt very strongly about it.

I was really surprised that they seemed to have no interest in the reindeer counting story after they liked the Thanksgiving counting story so much, but it totally fell flat.  They did finally perk up and get interested when I read Little Mouse's First Christmas and got into guessing what each discovery was.  Then they really got interested when I pulled out the bells for "Jingle Bells", so we at least ended on a positive note.

I have learned since then that doing storytimes close to any of the big holidays can be tricky.  You never know what the kids are going to be like because they are usually out of their normal routine, and often over-stimulated.  They may be bouncing off the walls with excitement, or they may be past that stage and starting to crash and withdraw from sensory overload and be hard to get engaged.  So, you have to be prepared with back-up books and activities, and adjust on the fly.  But, sometimes, if you're lucky, you get them right at the point where they are really enthusiastic but still in control, and you can have a lot of fun!
Posted by Jen at 8:00:00 AM