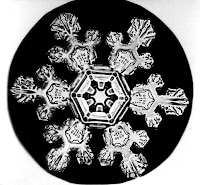 One of the ten daycares the Storytime Bus visits asked that we not do a Christmas-themed storytime per their corporate rules, so I had to come up with an alternative to use with them during the rotation I had planned Christmas for everyone else (for my thoughts on the whole holiday programming debate, see my "To Holiday, Or Not To Holiday" post).

As it happens, this daycare had missed out on our numbers/counting theme back in September because of Labor Day, so it made sense to use that theme.  But I wanted it to still be somewhat seasonal, so instead of using the same selection of books I used then, I pulled some winter-themed counting books and put together some wintery songs/rhymes/felt sets to go with them.  I used 2-3 books and a couple of the songs and/or rhymes with each group.

The First Day of Winter by Denise Fleming is a great book for this theme, and has a snowman gradually becoming fully accessorized over ten days.  I like how it not only counts up from 1 to 10, but is one of the few books that has the ordinal numbers from first through tenth as well.  And you can either read it, or sing it to the familiar tune of "The Twelve Days of Christmas".

Ten On The Sled by Kim Norman and Liza Woodruff has 10 animal friends sledding down the hill, and counts down from 10 to 1 as they fall off one by one.  This is another book that can either be read or sung, using the tune from a song from my childhood, "Ten In The Bed".

Snowbaby Could Not Sleep by Kara LaReau and Jim Ishikawa is a story about a little snowbaby who "could not, would not sleep".  This is not actually a counting story per se, and only refers to counting snowflakes without actually showing the counting.  But, I really wanted to have at least one book that had a real story, and while the story does not show the actual counting, it is easy enough to pause and count the snowflakes that are on the next page.  The kids can also join in with the repeating "But Snowbaby could not, would not sleep" line.

Snowboy 1, 2, 3 by Joe and Wendy Wahman starts with two children walking through the countryside, unaware of the adventures of the snowboy and his woodland friends going on behind them.  This one counts from 1 to 10, and then back down to 1, and has rhyme and bright illustrations.

Millions of Snowflakes by Mary McKenna Sidals and Elizabeth Sayles is a sweet little story about a child playing outside in the snow and catching snowflakes.  It only counts from 1 to 5, and it is a little small with pastel illustrations, but I like the text and the pretty snowflakes of different patterns.  There are also movements the kids could act out as you read.  This one I thought would be good for the younger kids.

I already had a "Five Little Snowmen" rhyme and magnetic set I had made last year, and I found a couple of "Five Little Snowflakes" rhymes, one that counts up and one that counts down, and made up a simple "Ten Little Snowflakes" song.  Then I cut out some felt snowflakes to go with them.  Since I have shown these in recent posts, I'm not going to write them out again; but you can follow the links to get all the details.  I also made up a "Ten Little Snowballs" song:

Ten little, nine little, eight little snowballs.
Seven little, six little, five little snowballs.
Four little, three little, two little snowballs.
One snowball left to throw!
How It Went
The weather decided not to be co-operative with my theme, being 60 and rainy following a 70 degree weekend (normal here would be in the 40's!), but otherwise everything went fine. I think the favorite books for the kids were Snowbaby Could Not Sleep, because it had an actual story and a cute snowdoggie; and Ten In A Sled, because it was silly and had lots of different animals.  They did fine with the others, though were a little confused by some of the unconventional snowman parts in On The First Day Of Winter.  In their minds, a carrot is the ONLY acceptable nose for a snowman.

Of the songs and activities, they really had fun with the "Ten Little Snowballs" song and pretending to have a snowball fight (I was so mad at myself for forgetting to bring our soft foam pretend snowballs to throw), and really liked the "Five Little Snowmen".  First they all wanted to pick out which snowman they liked best, then they really got into the melting idea and thought it was silly.  Afterward, I told them I also knew a way to turn it into a game, and had them stand in a circle while I walked around behind them as the "Sun" while we said the rhyme.  Then, when we got to the part about melting, I would tap one or two of them on the shoulder to tell them it was their time to melt.  They LOVED playing this and the suspense of who would have to melt each time!
There was a new little girl in the class who spoke no English.  She did have trouble paying attention to the stories, but when we did the snowman activities with motions, she started copying what we did.  While I'm not sure how much she understood about what we were doing when we did the game version, she clearly appreciated the silliness of melting and really seemed to enjoy it.  Despite the language barrier, she seems very well-adjusted and completely comfortable and happy to be there.  Her teacher said the child's mom stayed with her the first day to ease her transition.  That is, until the little girl asked her, "Why are you still here?" and told her to go on home!

This winter edition of the counting theme proved to be more fun than the general one!
Posted by Jen at 2:11:00 PM