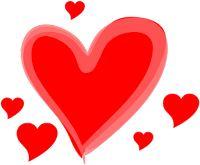 I made a couple of quick and easy felt sets to use for my "Love"- themed storytime.

First, I cut out 5 red felt hearts using an Ellison die cutter, then I printed out the letters to spell "HEART" in a large font to use as patterns and cut them out of pink felt.  I would first place the hearts on the board, having the audience count them as I did.  Next, I would put the letters up one by one.  I would see if the kids could tell me the beginning and ending letters by their sounds, and for the middle ones I would put them up and see if they could name them.  Then, we would sing a spelling song to the tune of "B-I-N-G-O".

Valentines, valentines, count them all with me.
(gesture to self)

One for father, one for mother
(Hold up first and second fingers, put hearts on board with or without numbers)

One for grandma, too.
(Hold up third finger, put another heart on board)

One for sister, one for brother,
(Hold up fourth and fifth fingers, put up remaining hearts)

And here is one for you!
(Make heart with thumbs & fingers)