These are the various songs, rhymes, and activities that I used during the two-week rotation of the "Love" theme for the Storytime-To-Go program.  See my previous post "Love - The Books" for all the books I used.

I made a set of felt hearts with the letters in the word "heart" and numbers 1 through 5, plain on one side, and with faces on the other.  These could be used in various ways with different songs and rhymes.

[After each verse, remove one letter and clap in it's place]

Five little hearts, all in a row.
[hold up 5 fingers, gesture to hearts in a row]

The second one said, "Will you be my valentine?"
[hold up 2 fingers, hold hands outstretched]

The third one said, "I will if you'll be mine"
[hold up 3 fingers, point to audience, then self]

The fourth one said, "I'll always be your friend."
[hold up 4 fingers, make sign for "friend"]

The fifth one said, "We'll be friends until the end"
[hold up 5 fingers, make sign for "friend"]

"I Have a Little Heart"

I have a little heart.
[put hand on chest]

It beats even faster when I jump, jump jump!
[jump 3x]

I get a special feeling when I look at you.
[point to eyes, gesture to audience]

It makes me want to give you a hug or two!
[hug yourself] 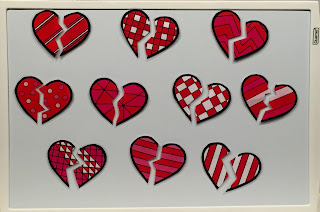 For this activity, I found a printable with 10 hearts with different patterns from "Preschool Printables".  You could simply print out two of each, but I decided to add a "puzzle" element to it by cutting each one in half in different ways so that each one would only fit together with it's mate.  [These are printed on cardstock, cut out, laminated, and magnets attached to the backs.]

First, I handed out one half of each of the hearts to the audience and kept the other halves.  First I tried just putting one up on the board at a time, and calling for whoever had the matching piece to bring it up to place on the board, but this proved to be too challenging for several of my groups.  So then I tried putting all my halves up on the board at the same time, and calling the kids up one at a time to find the match for their piece and put it up.

This seemed to work much better.  I would start with one of the adults, since it is the most challenging at the beginning and all the pieces are available, and they could talk it out and model the problem-solving.  After the first match was made, I would ask the kids what shape it made, then at the end I would ask if they agreed that all were matched correctly and we would count them.

These aren't really an activity, but props to accompany the book The Day It Rained Hearts by Felicia Bond.  It's a really cute story, but the book is small, and the illustrations don't even fill the page.  I cannot understand why on earth they chose to make the illustrations so tiny and hard to see.  So I made models of each of the valentines that the character in the book makes to hold up and show the kids so they can really see them, and see why they are perfect for each friend they were given to.

How It Went
I was a little disappointed in how the these activities went.  I've used them before and thought they worked well, but most of the groups I used the song and rhymes with did not get into them or participate very well.  I will have to try some others next year.

The matching activity did go over well, however.  Generally, the kids really respond to activities where they each get their own "piece" to do something with (though I did have one girl who was very shy and cried because she did not want to do it, so we let her choose a friend to bring hers up for her).  The only drawback was that I could only use it with groups of 10 or less since I only had 10 different hearts.
Posted by Jen at 12:00:00 PM