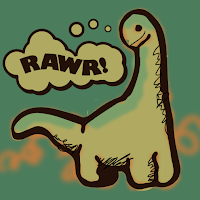 I love dinosaurs, so this is one of my favorite themes.  I know a lot of fun activities to go with this that really can't be done in a regular storytime, so I really hope to someday get the chance to do a special dinosaur program in the library that would be longer and include some older kids as well.

We started with our usual welcome song, and then I prompted the kids to guess what kind of stories we were having by telling them that we were talking about something that lived a long, long time ago, and wasn't around anymore, and some of them were really big.  They had to think a minute, but after several wrong guesses someone got it.  Then we went into our "story song", and I included a verse with roaring like a dinosaur. 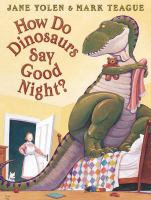 For our first story I chose to read Jane Yolen's classic How Do Dinosaurs Say Goodnight (illustrated by Mark Teague) because kids really seem to love that series, and I had not actually used any of them in my dinosaur storytimes before.  I like the illustrations, and how the name of the dinosaur shown is hidden somewhere in each picture.  These books have a nice rhythm and cadence, and they help kids recognize bad behavior. 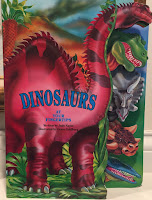 Next, we looked at a bright, colorful non-fiction dinosaur board book, Dinosaurs At Your Fingertips by Judy Nayer and Grace Goldberg, that had pages with die-cut edges, so that when the book is closed, it looks like all the dinosaurs are peeking out of it.  We went through the book and I would name the dinosaur and have the kids repeat it, and I would point out 1 or 2 interesting facts about each one.  I think this book has a lot more visual interest than many other non-fiction books for this age, with relatively realistic but brightly colored illustrations that are not cluttered with too much detail or information.

After that, we marched along to Laurie Berkner's "We Are The Dinosaurs" song.  This is a great song with lots of movement.  Besides marching, there is pretending to eat food on the ground, resting in our nest, and of course roaring at the end.  They liked this so much we did it twice. 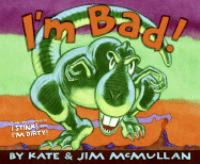 For our last story I chose I'm Bad! by Kate and Jim McMullan.  I like this book because it has a lot of action to help hold the kids' attention, and you can make it interactive by having the kids act out some of the movements, like showing claws and teeth, stomping feet, etc.  I also like the twist to the story, with the audience at first thinking he's a big, bad fierce Tyrannosaurus rex, but in the end he's really just a baby, which explains why he had so much trouble catching prey.  Then after he eats, he looks cute and harmless as he curls up and goes to sleep.
Then we sang a song I literally made up 5 minutes before I left to go to the daycare.  I wish I had thought of it the day before so I could have made some "dinos-on-a-stick" to go with it.

The mosasaurus' tail goes splash, splash, splash....
And by then our time was up and we sang our closing song and passed out stickers.

How It Went
I had a slightly smaller group of 12 today, which made things more manageable.  With a group that's this immature, the smaller the group the better.  Things overall went really well, they were all excited to see me and excited about the topic.  I'm still seeing a lot of fidgeting and moving around, but I think that's mostly a developmental issue.

Of the books they liked How Do Dinosaurs Say Goodnight the best, and were doing such a good job listening, I decided to try going straight into the second book, which didn't fare quite as well.  I'm not really surprised since it wasn't a story book, so some were not as interested as others.  Most of them seemed to like I'm Big! also, except for two little girls who just would not stop talking to each other.  They carried on their own little conversation the whole time, despite my attempts to correct and redirect.  So I decided it was best just to ignore them since the other kids were listening.

They LOVED Laurie Berkner's "We Are The Dinosaurs" and asked to do it again, which we did.  Some wanted to do it a third time, but I thought it was time to move it.  They also really enjoyed the song that I made up, since they got to do several different movements, but mostly the roaring.  Kids love to roar!
Posted by Jen at 12:19:00 PM