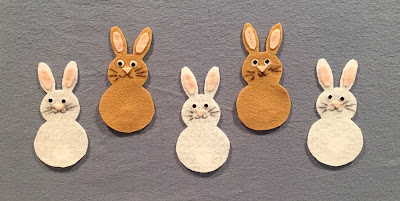 Obviously you can use the word "bunnies" or "rabbits", whichever you prefer, and this could of course be used around Easter time, but any time as well. I initially put this together to have an activity to follow the book Everybunny Dance!

I made a quick and easy pattern using the shapes tool in MS Publisher, with ovals for the ears and circles for the head, body, and tail. Feel free to use my bunny pattern, or make your own. I decided to use a mix of white and brown bunnies, but you could make them all the same, or use other colors.

When I go to the trouble to make felt pieces, I like them to be multi-purpose, so I will try to find other songs or rhymes to use them with. The first rhyme uses counting and rhyming words; this next song works on letter recognition with the addition of felt letters spelling out "bunny" and the tune of the classic song "Bingo":

Repeat, and after each verse turn one rabbit around, and instead of saying that letter, either clap or hop in it's place (depending on space and preference).

And here is a "Five Little Bunnies" rhyme that counts up instead of down:

One little bunny, wondering what to do,
another bunny came along, then there were two.

Two little bunnies, hopping like me (Hop)
Another bunny came along, then there were three.

Three little bunnies, jumping around outdoors,
Another bunny joined them and then there were four.

Four little bunnies, so fluffy and alive,
Another bunny joined them, then there were five.

Five little bunnies, ready for some fun,
Hopped away in the warm, spring sun.