Last year my boss bought these really cool gadgets from Lakeshore, called "Light & Sound Touch Circuits" that I used to demonstrate completing/interrupting a circuit as part of my "Paper Circuits" and "DoodleBots 2.0" programs last summer. At the end, the kids had a few minutes of free time to play around with the Touch Circuits, and they loved them so much, I knew right away I wanted to build an entire program around them.

I realized they provided a very simple and kid-friendly way to test electrical conductivity of different materials that would be safe for even the youngest kids, and I thought that would be a good program that would suit a fairly wide range of ages and abilities, involve making observations, analyzing data, drawing conclusions, then testing their conclusions.

Recommended Group Size: limited by number of Touch Circuits, but no more than 24

Budget: $25 for each Touch Circuit, the rest is negligible 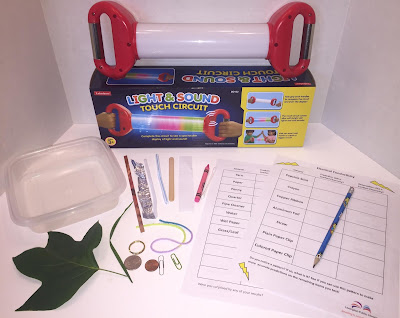 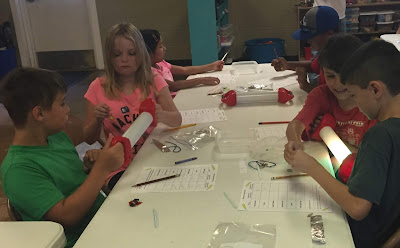 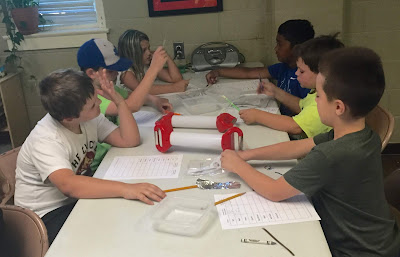 It went pretty well, except that the kids went through it much faster than I expected (they were almost all at the higher end of the age range this time). I made the mistake of putting the supplies out on the tables (with the exception of the Touch Circuits) in advance, so when the kids came in and sat down, they were distracted by the stuff and weren't really listening to my instructions.

At first some of them rolled their eyes, thinking this was going to be lame, but when I pulled out the first Touch Circuit, the faces of those who remembered them from last year lit up. I had expected them to take a little more time to think about their predictions and do the testing, but most of them raced through it (I realized later it was because this day camp is very laid back and unstructured and they are allowed to play video games and watch TV during free time). I also instructed them to stop at the end of the front page, so we could discuss the results and patterns before proceeding, and many didn't follow that instruction and got ahead.

I deliberately threw in a couple of tricky or surprising items, like plain versus uncoated paper clips, and pipe cleaners. The coated paper clips will not conduct electricity despite being made of metal because the colored coating acts as an insulator. Similarly, the chenille on the pipe cleaners can act as a barrier, and one must either squeeze very firmly or touch the end to be sure to contact the metal core. I was impressed that some of them figured those things out on their own. They were almost all surprised that water was conductive, and that the leaves and grass were conductive.

Afterward, I let them have about 15 minutes to play around with the Touch Circuits, and they had a blast seeing what kind of crazy circuits they could make, and linking several together. We turned off the lights so they could really see the lights and colors. Here is a short video clip to see them in action, but it comes with a caution for those who may have seizure disorders due to the brightly flashing lights:

And here is a quick and dirty video demonstrating how the Touch Circuit can be used to test conductivity: