Here is the second of my new shark felt/flannel props: felt shark finger puppets to do a take-off on the classic "Two Little Blackbirds" rhyme.

I was inspired by Sunflower Storytime's blog post, but I wanted the rhyme to use contrasting terms, so I just used her first verse, with modification, then made up the remaining verses myself.

I used the same pattern from Repeat Crafter Me for the puppets, though scaled them down slightly. They are simply glued together about 3/4 of the way around the edges, leaving a portion of the bottom open. Of course, you can sew them if you prefer, but I don't have the time or patience for that. 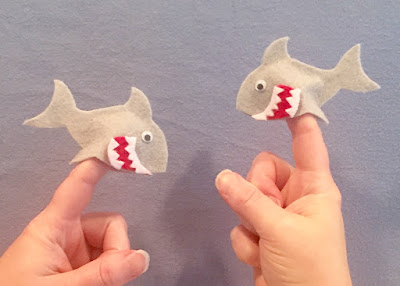 Two little white sharks, swimming in the sea,
One named Leo, and the other named Lee.
Swim away Leo; swim away Lee.
(move around behind back)
Come back Leo, come back Lee.
(bring back around to the front)

Two little white sharks, swimming around the pier,
One named Far, and the other named Near.
Swim away Far (hold far behind back),
Swim away Near (hold close behind back).
Come back Far (hold away in front of body),
Come back Near (bring around front close to body).