My department was asked by one of our clients to provide a program that might somehow tie in with their topic of the week, which was the Titanic, and "Sink or Float?" seemed like an obvious place to start.

My first thought was to have them test various items, then to compare the same material in different forms, such as a flat piece of aluminum foil versus a crumpled piece, versus a folded piece and experiment with folding and shaping the same piece of aluminum foil to see if it could hold more weight. I also wanted to do the same thing with clay, comparing how a ball would float or sink, versus a flattened piece, verses a piece molded into a more boat-like shape and seeing if it would hold weight as described on the Playdough to Plato blog.

These activities would let them observe how both density and water-displacement affected buoyancy. I then envisioned them using this knowledge in designing and building their own boat using provided materials and seeing whose could hold the most weight. However, we ended up going a different route because of very limited time to plan and gather supplies, and we found out the kids were going to be on the younger side this year. So, instead we made use of several Lakeshore kits we already had on hand, and supplemented with a few other items. 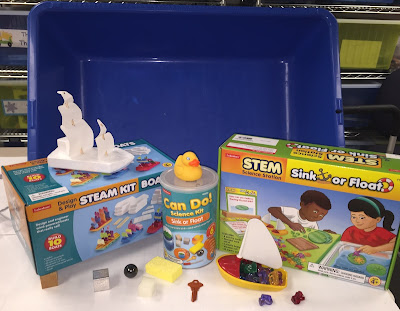 
Procedure
1. Using several of the items from the first kit and other items, let the kids each take a turn dropping things in the water to observe if they will float or sink, AFTER they first examine them, consider size and weight, and make predictions. 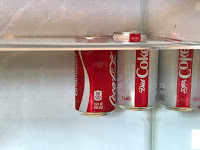 2. Make predictions and then test the Coke vs. Diet Coke. We expected that the Coke would sink and the Diet Coke would float, as led to believe by internet videos, but we did not find that to be the case.

However, there is a very slight, but definite difference. The regular Coke does not sink, but floats just at the surface, while the Diet Coke floated about 1 cm above the surface (we used the 6 oz mini cans). 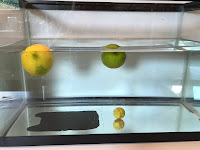 3. Then compare the two types of lime and the lemon side by side after encouraging participants to make predictions. This is one internet tip that did hold up in our test!

The kids will likely expect them to be the same, or that the larger lime might sink and the smaller one float, but it's the Key lime that is actually more dense and will sink. [Fun Fact: The "regular" Persian lime is actually a cross between the Key lime and lemon.] 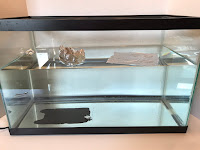 4. Place a flat piece of aluminum foil in the water and observe it floats (mostly due to surface tension). Ask them to predict what will happen if you crumple it up (it will still float because of trapped air, i.e. lower density). Then ask them to predict what it will do if you fold up an identical piece (several times until very small). 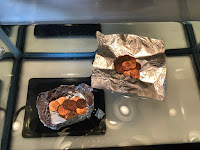 5. Then, fold up the sides of another identical piece and then show that it can hold more weight and remain floating than a flat piece due to water displacement; this is why ships that weigh many tons and are made of steel can float.

7. Try a couple of the suggested activities in the Lakeshore STEM Science Station kit. For example, put one of the plastic boats in the water, then let the kids take turns adding the little plastic "jewels" to see how many it could hold before it sank. The kids will likely instinctively distribute them evenly.

8. Repeat, but add jewels to just one side of the boat and observe how it holds fewer when the weight is distributed unevenly.

We then got out the Design & Play STEAM Boat kit and let each kid put together their own boat, of their own design, then tested them in a large, shallow tub of water to see how they would sail. The kids could make adjustment to their design if desired, and then we had a sailboat race.

It went pretty well, and even though "Sink or Float" is a basic activity that is often done with kids as young as 3, they really seemed to enjoy it, especially with some of the unexpected outcomes. I was disappointed that the Coke (more dense because of all the sugar) vs. Diet Coke did not work as dramatically as internet videos would suggest; perhaps the larger 12oz cans would work better?

I wish I had realized we had the "STEM Science Station" kit earlier, and had time to look it over more carefully. It goes beyond the simple "Sink or Float" activities, and involves more critical thinking. However, it is a little pricey, though, so I'm not sure I would buy it if we didn't already have it on hand. The activities could be replicated fairly easily, though.

The Design & Play kits were a little too simplistic I thought, and involved really very little creativity and design input from the kids. Everyone got an identical styrofoam hull, then there were tall and short masts, two sizes of sails, flags, and small styro blocks they could add and arrange however they wanted. The masts did not really fit securely into the foam, either, and kept falling over. But it did give them something to make and take home.

If I were to do it again, I would have them each experiment with shaping the foil and clay to see who could come up with a boat that would hold the most weight, and for older kids, give them an assortment of building materials and let them design and build their own boats from scratch. The engineering class at the local high school has a competition each year where teams build boats out of nothing but cardboard and duct tape, and then they take them to the local pool and race them. It's amazing how well some of them work!
Posted by Jen at 7:26:00 AM