So You Want to Be On a Book Award Committee? 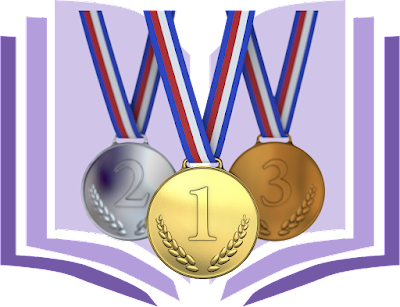 With it being awards season, you may be wondering what it's like being on a book award selection committee and how one gets to be part of it all. Or, you might be thinking you could surely do a better job of selecting books that were both "distinguished" AND would actually appeal to the children they're supposedly written for (yes, I'm looking at you, Newbery and Caldecott).

I've wanted to serve on a book award committee for a few years, and after first applying and being rejected by the Cybil awards [given by youth literature bloggers], I finally found an opportunity with the Bell awards, an award given by a state-level organization focused specifically on early literacy. The Bell awards are for picture books that uniquely support and/or model the five early literacy practices of read, write, sing, talk, and play. I felt I was well-qualified for this, and that it would be a great opportunity to see all the best new picture books and meet other like-minded librarians in my state.
The Bell awards work have a rather unique selection process. First, anyone can suggest a book for consideration, then committee members assigned to a given practice decide which books suggested for that practice fit the criteria and are worthy of nomination. Generally 10-15 are nominated for each practice, and the committee then meets as a whole to discuss and debate the nominees and narrow it down to 5 finalists for each practice. The finalists are put to a vote by the general membership and public, as well as a separate vote by the committee members. After polling has closed, the committee meets one last time to compare and discuss the results of both polls, and select a winner for each category.

So what was my experience like? Well, not quite what I expected. I thought it would be a great way to familiarize myself with some of the best new picture books that year, and it was, but it wasn't easy finding the books. I also thought it would be a good way to network and get to know other librarians in my state who were as passionate about early literacy and picturebooks as I was, but due to Covid making all of our meetings virtual, I really didn't feel like I got to know any of the other committee members. I thought it would be a fun experience, and it was rewarding, but it was also a lot of work, and there were some frustrations and difficulties I had not foreseen.

To start with, I had a great deal of difficulty getting my hands on all of the suggested books for the practice I was assigned to, and then for all those nominated across all practices, which I hadn't expected. Publishers will send you free copies for the big national awards, but for the lesser known awards you are on your own in finding them. I had to go into the big meeting to pick the finalists without having been able to get my hands on at least a third of the nominees. I also thought I would be able to do some of the work "on the clock" since it is service to the profession, but the library where I worked at the time was so grossly understaffed that wasn't possible, and I felt I just wasn't able to put the time and effort into it that I should have. Then, to further complicate things, I ended up leaving that library and moving across the country for a better opportunity the week before the big meeting to select the finalists.

I thought it would be fun discussing all the books, but to be honest, it was mostly frustrating. As with any group of people, there are always one or two personalities that seem to dominate the conversation. I often felt talked over and had a hard time getting a chance to say what I wanted to say, and sometimes just gave up. I think this was made a lot worse by being virtual rather than in person, and the meeting set-up did not have a "raise hand" option. It seemed that sometimes one or two members would keep circling back and pushing for re-vote after re-vote, until they wore enough people down to get the outcome they wanted. The meeting to choose the finalists lasted an entire day and was just exhausting.

Fortunately, by the time we met to choose the winners I had been able to get all of the books except for one, and had time to carefully consider them and pick my top choices. Luckily that meeting was much shorter! In most cases the popular vote and the committee vote were fairly similar, but there were differences. I had expected that if both polls had the same book in first place, then that would be it and we would only have to discuss the ones that were different, or if the first and second places were very close. But we actually discussed and re-voted on all of them, and in at least one instance the book ultimately named the winner was not the one that had gotten the most votes in the original polls.
Though NONE of my top choices ended up winning, I was okay with the final slate of winners and most of them were my second choices. In truth, all of the finalists were great books and sometimes it was splitting hairs to choose one over another. In fact, all the nominees were great books, some were just better suited for toddlers and preschoolers, or were more unique in some way. You can see all the finalists here, with the winners being announced around the middle of February, but you can see all the past winners now. One thing I really like about these awards is that a few activities that support early literacy skills are provided for each of the five winning books.

Did I find the experience worthwhile? Yes, despite some frustrations and it not being exactly what I expected, it was a worthwhile, rewarding experience. Would I do it again? Maybe not this particular award, since I'm no longer in that state (living/working in the state is not a requirement, but being in significantly different time zones makes it more inconvenient for me), and maybe not right away, but yes, after I've had a break and gotten settled into my new job and have the collection and programming where I want them and things can be in person, I would love to serve on another book award committee in the future, maybe something for middle-grade literature next time.
Posted by Jen at 10:50:00 AM