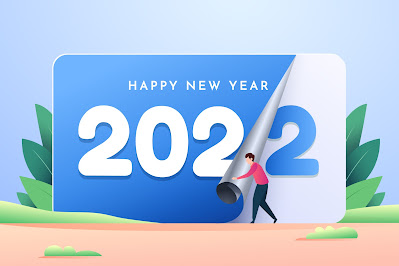 Time for my annual reflection on the past year and setting goals for the year ahead. 2021 didn't quite turn out to be the return to normal that many had hoped, but it was a less tumultuous than 2020. However, that doesn't mean it was without its ups and downs. Personally, it was another year of big changes, but this time it was by choice and on my terms.
2021 began with the library being shut down once again due to a very high number of Covid cases and high rate of transmission, but then reopening at the end of January. Summer brought us a nice reprieve and a glimpse of something reminiscent of normal, before having to take a step back and return to mask requirements as the Delta variant reared its ugly head, with Omicron following closely on its heels.
Professionally speaking, it was quite a challenge having to constantly change gears and adjust programming to the continuously changing situation. I did virtual storytimes, take-home early literacy kits, and hybrid virtual-plus-kit STEM programs in the winter and spring, and thankfully was able to transition to in-person outdoor storytimes and family programs in the summer. It was so wonderful to have real live children at my storytimes again! In the fall I began programming for school-age kids on Fridays, when they were out of school (yeah, it's weird, they only have a 4-day school week) that was usually STEM activities, but sometimes games or a craft.

As far as professional development, I did a number of webinars, though most were rather ho-hum and stuff I already knew, though I did really like Ryan Dowd's "Kicked Out" webinar which focused on enforcing rules, but how to do so with compassion and using de-escalation techniques.[Personally, I think all public service staff should take this training as I have observed many do not have the skills needed to handle these situations appropriately.] I was supposed to attend our state conference in September, but at the last minute our director decided not to let us go, which was both frustrating and disappointing. I also finally got to do something I've always wanted to do, which was serve on a book award selection committee. (I'll write more about this later once we are done for the year.)

I worked at maintaining a better work-life balance and healthier lifestyle, and did pretty well most of the year, but at the expense of my reading. Between that and working full-time, I read far fewer books than in previous years, which was a bit frustrating. But I found after returning home to accept a new job many of my bad habits have returned, so I am going to have to continue working on that. Over the course of the year, it became very clear that the job I had as the sole librarian and assistant manager at a tiny branch in a larger system was not a good fit for many reasons, so when a youth services manager position opened up at a library back home that was bigger, but not part of a system, I jumped on the opportunity when it was offered to me.
Now looking to the year ahead, I think we are in for another year like the last as far as the pandemic is concerned. Cases are rising fast due to the greater transmissibility of the omicron variant, and will peak, then gradually fall. I expect we will have another summer reprieve followed by more variants in the fall. We will have to continue to change gears and adapt. I don't think we will ever see a return to the old normal. The pandemic isn't going to be over any time soon; it will likely drag on and we as a society and as a profession will eventually decide it's just time to move on. Hopefully by that point the virus will have mutated to become much less virulent and truly become more like the seasonal colds and flu.

But I don't know if public libraries will ever get back to the way things were before, certainly not any time soon. The normal flow has been disrupted far too long. People are out of the habit of coming to the library and frustrated by the constant changes, children have gotten older, some people are still avoiding public places. Until we get to a point were we can have some stability and consistency in programming and hours, we can't really begin to regain our place as a vibrant community center; public libraries have been set back 20 years. But, we will keep trying.
Once again, I'm not going to set any really specific goals because things are just too uncertain and constantly changing. I hope to present at a conference for the first time, and have submitted a proposal to our state conference. It is currently scheduled to be in-person, and I really hope that doesn't change, but I wouldn't be surprised if it goes back to virtual again. I'd also love to attend the ALSC Institute this year. As I mentioned in my previous post, I have a lot of collection work ahead of me in my new job, so will be doing a lot of weeding, re-organizing, and buying new materials, and I hope by the end of the year to have made significant improvements and figured out a schedule for ongoing evaluation and maintenance.

I also have summer reading to figure out, and programming in general. It looks like I may have to go back to doing take-home kits for a while, but still need to figure how to accommodate the after school crowd, because those kids are going to be at the library regardless, so we might as well have activities for them. For the most part, this year will be settling into the new job and working towards getting the collection in better shape, making the department more welcoming, and hopefully increasing circulation a little. By next year I hope to see significant improvements, but will probably take 2-3 years to get things where I really want them and get the hang of developing the collection and selecting materials.

I'm not sure what direction my blog is going to take. It started out primarily as a way to both share and have a record of all my storytimes and other programming. But at this point, I've done so many storytimes that I'm now mostly repeating things I've done before and writing them up has become tedious and seems redundant. Also, as a new youth services manager I'm entering a whole new realm of responsibilities, including collection management & development, managing staff, and planning and executing an entire summer reading program myself. So while I will still occasionally write up storytimes that have new themes, new structures, or new materials, I will likely shift to writing more generally about early literacy and other programming, and more about youth services management and philosophy.
Mostly for this year I hope for things to stay calm and continually move forward, even if just baby steps at a time. I'm sure there will still be set-backs, but hopefully not too many! I wish everyone peace and good health in the coming year!
Posted by Jen at 11:15:00 PM

Email ThisBlogThis!Share to TwitterShare to FacebookShare to Pinterest
Labels: Reflection