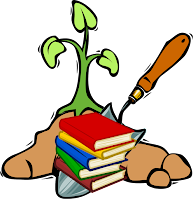 As I've mentioned previously, I recently started a new position as youth services manager and inherited a very neglected and mismanaged collection that had never been properly weeded, rarely had new materials added other than those specifically requested by patrons, lacked diversity, and was very biased toward a particular religious point-of-view.

So I have been ordering new materials, while weeding as much as I can as quickly as I can, to get the collections in better shape by summer reading. Last time I shared one of the most egregious books I came across in terms of physical age and condition; this time I'm sharing one of the worst in terms of content (though age and circulation are factors as well).
Allow me to introduce you to the horror that is He Gave Her Roses, one of over 200 titles that showed up on my report of YA fiction that had not been checked out in *six* years [I was extra generous in my criteria to keep it to a manageable number of books for my first round of weeding]. This one caught my attention because it was such a small paperback and the terrible cover art that not only immediately dated it as being from the 1990s (1990 to be exact), but is also super creepy as the girl on the cover looks like she's either dead or a mannequin! 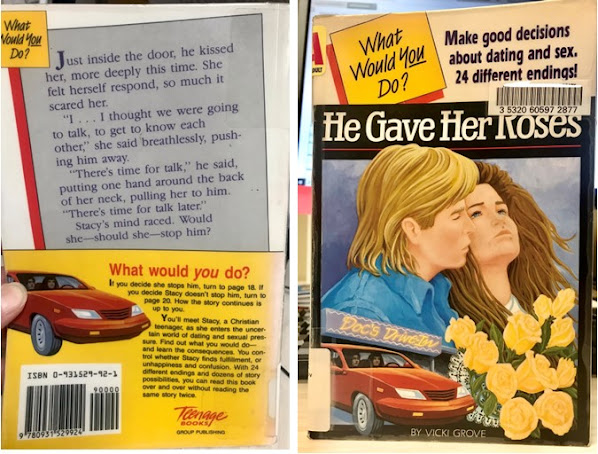 As you can see, this is a choose-your-own-ending type of book about dating and sex. This book hadn't circulated in years and clearly should be weeded on that alone, but I also suspected dating advice from 1990 would not only be irrelevant, but would likely be problematic considering we've made some progress (though still not enough!) in the areas of consent, victim-blaming, and general awareness. What is not obvious from the front cover, but is clear on the back cover or as you begin reading, is that this is a religious belief-based book, written from a 1990 conservative Christian viewpoint.

The main character is Stacy, identified as a Christian teenager who is beginning a relationship with her first serious boyfriend. This of course leads to deciding whether to have sex or not. In various story threads, Stacy may or may not get pregnant; may keep the baby, give it up for adoption, or have an abortion; may marry the father, someone else, or never marry; may or may not finish school and go to college. The only happy endings are when Stacy makes all the "virtuous" choices, or repents her "bad" choices and finds a renewed commitment to her religion and becomes very active in her church.
Many of the threads end with Stacy being unhappy and often alone as a result of her less than "virtuous" choices, such as the one below where Stacy does go to college and starts dating a 'nice Christian boy'. But when he finds out she's not a virgin, he dumps her. Of course poor Stacy doesn't blame him, and is left wondering if she'll ever find someone to love her, with the implication that she's now damaged goods. [When it says she doesn't blame herself, it means she doesn't blame herself for being honest and telling the guy she's not a virgin; she totally blames herself for not being one and for him dumping her because of it.] 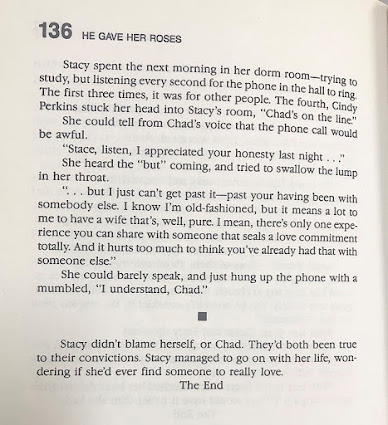 This book is full of fear, shame, guilt, and judgment, and places all of the responsibility and consequences on the girl. It sets girls and women up for believing that they deserve every bad thing that ever happens to them if they've ever had premarital sex, that they are damaged goods and have no worth, while simultaneously reinforcing a double standard for men. Personal disgust aside, it clearly should be weeded on lack of circulation alone, but also has little relevance for today's teens and young adults, and could be harmful. In my opinion this book did not belong in a public library collection to begin with as it does not meet selection criteria. I've seen it listed as the first of a series of "what would you do" books, but I can't find evidence of the existence any others (and that's a good thing!).
It was weeded, and now sits on my "Shelf of Shame" (yes, I do get the irony), which are examples I'm saving to use in staff training and a possible future presentation on collection maintenance and development, once I've gotten my collection in good shape and hopefully have some meaningful circulation stats to show that a well-curated collection circulates better. I will be replacing it with a modern book on dating and relationships with no religious bias that includes a thorough discussion of consent (TBD) and is more inclusive. If you can suggest a good replacement, please do!
Posted by Jen at 1:42:00 PM