This week on the bus we did numbers and counting, and used the following books at one time or another, though just 2 or 3 with any given group:

Doggone Dogs! by Karen Beaumont is a little on the longer side, but very funny as a pack of dogs get into all kinds of trouble.  Note:  there is a mention of poop.

Mouse Count by Ellen Stoll Walsh shows our heroic mice one again, this time outsmarting a snake who plans to have them for his dinner.

Russell the Sheep by Rob Scotton is about a poor little sheep who can't get to sleep.

Ten Dirty Pigs by Carol Roth is a reversible book.  One side shows the dirty pigs one by one getting into the tub, the second part shows the 10 now clean pigs getting out of the bath and getting dressed, only to get dirty all over again.

One Blue Fish by Charles Reasoner is a lift-the-flap counting book that also shows colors, a good tie-in to last week's theme, and good for younger kids.

1, 2, 3 To The Zoo by Eric Carle counts up to 10 by showing train cars full of animals on their way to their new home in the zoo.  Charming illustrations, and the kids enjoy making the appropriate animal sounds/motions.  See if they notice the mouse on each page.

Soup For One by Ethan Long shows flies coming in the window one by one to enjoy a bowl of soup.  Observant kids will spot a sneaky spider lurking about, but the ending has a bit of a twist.

Ten Little Apples by Natalia Vasquez is an illustrated version of a classic rhyme about the wind blowing apples down, with a turn-the-dial feature.

One To Ten and Back Again  by Betty Ann Schwartz is another reversible book with an interesting pull-through ribbon feature I've never seen before.  The novelty feature will interest kids, but the pictures on the ribbons are tiny.

We used a number of different songs, rhymes, activities as this theme could get monotonous.  The songs and rhymes we used were:

Count down to Zero, and end with "...because Sally is a horse!"

Show fingers to count, then clap to pretend to pop bubbles, or use real bubbles.

"Five Elephants In The Bathtub"

I used my finger puppet glove I made using printables from Leah at Sunflower Storytime, while my partner showed the kids how to do the hand/finger motions. 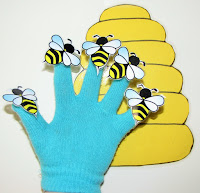 We also did additional activities such as counting all the people on the bus, then comparing children versus adults, boys versus girls, various items; estimating how many hands tall they were, then measuring (we are in horse country, after all), pointing out the different numbers on the walls, etc.

How It Went
To be honest, this was my least favorite storytime theme of all time.  With the exception of colors, I generally find strict concept-based themes to be too boring and monotonous anyway, but especially this one.  I wasn't too pleased with the selection of books in the kit.  They were okay individually, but they were almost all counting books with no real story, so as a collection it was just too repetitive and too much of the same things.  I tried to find some books with more of a story, but didn't have much luck.  The first day of the theme was the worst; only one of the 5 classes we had showed much interest or engagement.

However, the rest of the week was a little better and some of the books did well with other groups. They loved the hijinks of the dogs in Doggone Dogs!, and of course the mention of poop is always a hit with the boys in particular.  Russell the Sheep was also well received, as was Mouse Count and 1, 2, 3 To The Zoo.  One Blue Fish also fared pretty well, even with the older kids.  The remaining books we used were okay, but did not induce as much enthusiasm.  Soup For One was hit and miss, with some groups being very observant and noticing the sneaky spider right away and appreciating the humor, but others completely missed it and therefore found the story boring.

Of the activities, "Sally the Camel" was a big miss.  I was told it was always a big hit and kids loved it, so I had to try it.  Well, they didn't mind singing it, but NO ONE got the joke, except for the teachers, and a number of kids didn't even know what a camel was.  No laughs at all, I could hear the crickets chirping.  So after the first day I searched for some more fun songs with actions.  The "Ten Little Bubbles" song was a hit, and would be even more fun if you had enough room to use real bubbles, and the "Beehive" rhyme is so short and simple, but the kids always love it when you have the finger-puppets to "buzz" them all with; lots of giggles and requests to repeat for both of them.  Of course there are any number of "5 Little..." and "10 Little..." rhymes and songs that you could use as well.

Adding the various counting, sorting, grouping and comparing more or less than activities break up the monotony and keep the kids involved as well.  If you want to try doing a numbers/counting theme, I strongly recommend you develop it more as a STEM-type program, rather than a traditional storytime, with fewer books and more activities.  Personally, I'd rather simply include counting books here and there in other themes rather than do a whole storytime on counting.
Posted by Jen at 4:08:00 PM