We began to feel a bit of chill in the air this week, hinting at the beginning of fall, which worked out perfectly for the "Apple" theme I had planned. ﻿

With each class we started out talking about apples, what color they were (I managed to trick 1 or 2 classes on this one, but most surprised me by remembering apples came in yellow and green, as well as red), what yummy things we could make with them, and showing them a few different varieties and how the seeds make a star pattern in the center. We used quite a few books with this theme this week, though only used 2 -3 per class:

Tap The Magic Tree by Christie Matheson is a very cute interactive book that shows how the tree changes during the seasons, and starts anew in the spring.  At first I wasn't sure how this would work as a group read-aloud, but it worked well.

Ned's New Home by Kevin Tseng is one of the few apple books that truly has a story, and is about a little green worm named Ned who has a perfect little home in an apple.  Until it starts to rot, that is.  To make it more interactive, let the kids name each fruit Ned tries out for his new home, and explain why his friends couldn't find him in the kiwi.

I Am An Apple by Jean Marzollo has charming illustrations and follows the growth of an apple from bud to harvest, and has a nice, simple illustration at the end of the life cycle of the apple.  We had a big book version of this one.

The Apple Pie Tree by Zoe Hall, another book that not only shows how the apple tree changes through the seasons, but culminates in baking apple pie.  I like how this one also shows the development of the robins from eggs to adults as well, and shows the kids playing outside in seasonal clothing to give more context to what's going on with the tree.

Ten Red Apples by Pat Hutchins shows the farmer's animals eating his apples one by one, and each time he exclaims "Yippee, fiddle-dee-dee" and "Save some for me".  This is a very interactive book that calls for lots of audience participation, with number recognition, counting, naming animals and making their sounds, and saying the farmers' repeating lines along with the reader.

Little Mouse's BIG Secret by Eric Battut is a very cute story about a mouse who finds an apple and buries it in the ground to keep it a secret.  But of course, as time passes his secret reveals itself!  I love the story, the repeating line of "It's my secret, and I'll never tell", and the lesson in sharing, but the illustrations are soo tiny the kids have trouble following what's happening at first.

Orange, Pear, Apple, Bear by Emily Gravett is a cute book with only 5 words.  I like this one, but I don't think the kids really quite get it, though a few do and some recognize the rhyming words, pear and bear.

Apple Farmer Annie by Monica Wellington shows the process in growing and harvesting apples, making different goods with them, then transporting them to market and selling them.  The book is rather small and a little too much information to hold most kids' attention very well.

Apples by Gail Gibbons is a non-fiction book that has way too much text and detailed illustrations to be a good storytime book, but it does have 3 pages showing different varieties of apples that are good to show and talk about.

We also had a few different songs/rhymes we used, generally 1 or 2 per class: 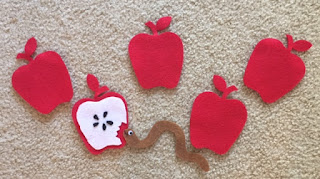 (Repeat, counting down to zero)

I also made felt pieces to go with it (using an Ellison die for the apples), inspired by Storytime Katie.  Each time the worm went "CRUNCH", I turned the apple over to show the inside with the bite out of it, and moved it to the bottom.

(Repeat, each time replacing a letter with a clap)  I used my felt apples for this as well, along with cut-out letters. 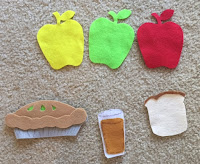 "Apples Juicy, Apples Round"
(to the tune of "Twinkle, Twinkle Little Star")

And felt pieces for this one, too (I was feeling crafty).  I just freehanded quick templates for these, but didn't think to save them.  I'm not happy with the apple "bread", so I'll have to figure out a better one.

How It Went
Although it went pretty well, and I was inspired to be crafty and make several felt pieces, I have to admit I wasn't as enthusiastic about this theme as I'd like, and I'm not sure why.  I think partly because I only really enjoyed one of the books, Tap The Magic Tree.  The others were okay, but just okay.  Also, on one of the days the volunteer working and I just didn't seem to be quite on the same page.

I would say the big winner of the books was definitely Tap The Magic Tree by Christie Matheson.  I loved the way this told the story of how an apple tree changes each season, and having the interactive component of being directed to do various actions to help the magic along.  I knew this would be an awesome one-on-one read, but was a little concerned about how it would work with a group, but the kids loved it!  The younger the group, the more impressed they were with the "magic" and some asked to read it again. Ten Red Apples also gets big points for audience participation, and The Apple Pie Tree scores in having a title that gets the audience's attention, and giving extra context to the seasons.  The other books were all somewhat well received, with the exception of Apple Farmer Annie.  I really wanted Little Mouse's BIG Secret to work well, but the illustrations really need to be bigger, and it needed to be more obvious that the mouse was burying the apple in the ground to hide it.

Of the songs and rhymes, the kids liked "Five Little Apples", with the cute little worm and bites taken out of the apples, and the apple version of "B-I-N-G-O" the most, as they had actions and props.  The "A-P-P-L-E" was not only fun, but a great early literacy activity, including counting, word knowledge, letter recognition, and phonics.  It blew one little girl's mind that there were TWO "P"s in the word "apple".  "No way!" she said, to which I replied, "Yes, way!"  The day before one little boy unfortunately had an accident and left wet spot on the carpet.  After the teacher whisked him away to be cleaned up, another little boy pointed to the pee stain and exclaimed, "Look, it looks like the letter 'P'!"  And sure enough, it did.  That just goes to show, anything can be turned into an early literacy lesson ;)
Posted by Jen at 4:31:00 PM