These are some new picture books we just got in at the library, though some have already been out for a month or so. 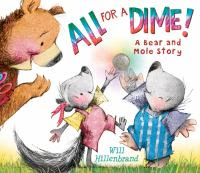 Bear and Mole are all set for Market Day; Bear has picked blueberries and Mole has collected worms.  When they stop to give their friend Skunk some of the berries, she decides to join them and sell her perfume.  But while Bear has no problem selling his blueberries, Mole and Skunk don't fare so well.

It's Will Hillenbrand, so of course the illustrations are adorably charming.  The story is cute and humorous, and is a good first lesson in supply and demand, though some of it may need to be pointed out to younger kids, like the fact that Mole and Skunk just end up passing the same dime back and forth, so it would be good to ask questions and have a little discussion about what happened after reading. 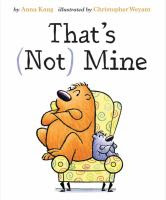 Two "fuzzy creatures" (I thought they were bears) are arguing over the big comfy chair:  "I was sitting there"  "I had it first" "It's mine", etc.  They keep arguing and trying to trick each other out of the chair, and end up crashing into the floor.  They make up and decide to go out and play instead, but as it turns out someone else was interested in the chair, too.

As a parent and youth services worker I could totally relate to the argument and found this book quite humorous in it's simplicity.  Any parent will relate, and I'm sure many kid, especially older ones, will be able to recognize themselves in the story.  This is some good, simple, silly fun with a subtle message about sharing and taking turns that can be discussed at the end.  The illustrations are perfect for a read-aloud as well:  cute, simple, with bold outlines. 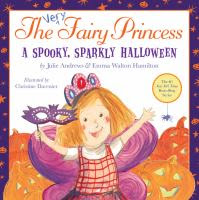 Gerry is looking for the perfect Halloween costume for the school parade; after all, a fairy princess is who she is, not a costume!  She finally comes up with one that works with her fairy identity beautifully and she is excited for the party and parade.  But when the day comes, an accident ruins her best friend's costume.  Will Gerry's unselfish quick thinking save the day?

I have to confess, I have never read any of the Very Fairy Princess books before, but I'm a Julie Andrews fan so I was hoping it would be good, despite my usual disdain for celebrity children's books.  Although there are a ton of cute Halloween books, this one is a nice alternative if you're looking for something not having to do with ghosts, goblins, and witches, and of course someone who is already a Very Fairy Princess fan will love it.  It is a cute story, with some clever and humorous lines, and I like that it shows the dad baking muffins and a male teacher.  It's a little long, so  probably better for one-on-one or for older kids as a group read-aloud. 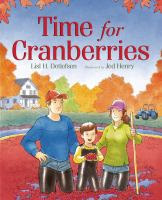 Follow Sam as he gets to help with the cranberry harvest on his family's farm for the first time.  This instructive story follows the harvest step-by-step, from the flooding of the bogs down to the baking of a cranberry pie (recipe included).  This story is inspired by the author's life on a Wisconsin cranberry farm.

I was excited to see this book initially, glad to have something new for the fall harvest theme.  There are lots of books on picking apples and pumpkins, and a couple on corn, but this is the first time I've seen one about cranberries.  I was hoping it would be a good storytime addition.  But, when I opened it I was disappointed.  There is way too much text, and I would like the illustrations to be just a bit more simple with bolder outlines and colors; it is just a little too long and detailed to work as a preschool storytime book.  But, it is still interesting and something kids have probably never learned about before, and would be good as a class read for older kids or as a one-on-one with younger kids.  It might work better if the adult read it first and paraphrased some the longer passages.
Posted by Jen at 10:52:00 AM