Since we talked about cowboys last time, I thought it was only fitting that we should follow that up with horses this week.  That, plus I really wanted to do Are You A Horse?  I am still sticking with a shorter storytime and only two books for this group, since they are mostly on the younger side of 3 and are having a little trouble settling in to the routine, not just for storytime, but in general according to the teacher.  They aren't bad, but just have excess wiggly energy and like to talk.

So we started with our welcome song, which some of them asked to sing twice, and then moved on to introductions.  I first asked them if they remembered what we talked about last time, and only one little girl seemed to remember, and it took a little prompting to jog the rest 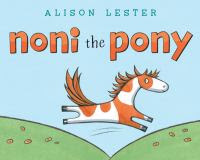 of their memories.  Then I asked what does a cowboy ride, and they all got that one right.  After explaining we were talking about horses, we moved onto our "Story Song", to which I added a couple of horse-y lines.  I decided to read Noni the Pony by Alison Lester first since it is pretty short, cute, and straight-forward and has a nice simple message about friendship.  It also shows that Noni likes to eat apples and carrots, which helped lead into the action rhyme I had planned next:

"I Gave My Horse An Apple" 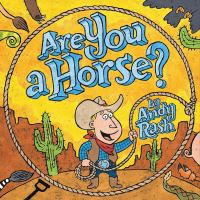 Then on to Are You A Horse? by Andy Rash!  This is a silly book that everyone loves.  Cowboy Roy's friends give him a saddle for his birthday and he has to find a horse to use it.  But Roy doesn't know what a horse is, so silliness ensues as he goes looking for one, with a funny ending.  The kids will enjoying saying what each thing is that Roy encounters, and get excited when they finally spy a horse.  It's interesting to see how long it takes different groups of kids to recognize what is hilariously wrong at the end.  Then on to a very simple song with only 3 words:  Giddy-up, whoa, and horsie, to the tune of the "William Tell Overture":

Then, we ended with our usual closing song and horse stamps.

How It Went
I had the largest group I've ever had there today, 16 kids, and they were pretty hyped up.  I like their enthusiasm and excitement, but we still need to work on reining it in a little bit (ha, get it, reining ☺).  They did not listen as well as I would have liked, and just couldn't seem to settle down.  I had even added more verses to our story song than usual, and had them stretch and shake their sillies out.  In retrospect, I might should have done the "Giddy-Up" song earlier and for enough verses to tire them out!  Part of the problem is the classroom.  It is too small and overcrowded and does not have a good place for the kids to sit in a nice 2-row semi-circle.  Instead they are over-crowded into several cramped rows, so they can't all see well, and when they are in the back it is hard to keep them engaged.  I'm not sure what I can do about that, but I will try a different seating arrangement next time.

The ones that listened seem to really like the stories.  They thought Noni the Pony was cute and sweet, and a good friend, and that Roy was very silly in not knowing what a horse was!  At the end it took some of them a while to register what was wrong about the picture, but once they did they all though it was hysterical.  This group definitely seems to like songs better than rhymes, so I will have to keep that in mind, and try to thing of ways for them to have more movement in such a cramped space without anyone being hurt.  Once again I noticed the teacher following up storytime with a coloring sheet related to the theme.  I think I will start providing some for her so she isn't having to scramble around at the last minute.

I was impressed with how much one little girl, who happens to have Down's syndrome, remembered from last time.  She was the only one in the group who remembered what our previous theme was, and evidently was really taken with the Lost Little Cowboy.  When I asked if anybody remembered what we talked about last week, she kept saying "Coyote, coyote" over and over, and when I acknowledged her, she then said "Moon, moon!".  She really liked the part about him howling at the moon.  It's nice to see when a book really makes a lasting impression on a child like that.  She kept asking for "More stories, more stories".

I also noticed she was hesitant to get in line to get a stamp.  She wears leg braces and walking seems a bit awkward for her, so I think she was wary of getting in the middle of the mob for fear of accidentally getting knocked off balance.  I was mindful that she was off to the side and was going to be sure she got a stamp, but I thought it was very sweet that the kids kept reminding me that she needed one.  I love to see when kids help each other and look out for each other like that.
Posted by Jen at 11:35:00 AM