The Storytime That Almost Wasn't

This was an unusual week for my Storytime-To-Go program.  Normally, we go out 6 days per each 2-week rotation.  I am generally on the Storytime Bus every day it goes out, except for one or two days each month when we have a pair of volunteers that need to work together for transportation reasons.  This time though, one day we were closed for a federal holiday, two days I had volunteer pairs scheduled so no need for me, then two days were snowed out, thanks to "Snowmageddon 2016".  So that left me with only ONE day on the bus, which was disappointing (and ironic) because the theme was "Snow", one of my favorites.

The Snowy Day by Ezra Jack Keats is of course a must-have classic.  I had this in both the standard book and "big book" versions.  I love the illustrations, and the simple story.  Kids always seem to enjoy it, and can relate to Peter's adventures in the snow (if they have had the opportunity to experience snow themselves).  I like to see if they can predict what will happen when Peter smacks a snow-covered tree with a stick, or explain what happened to Peter's snowball.

Caralyn and Mark Buehner's Snowmen At Night came out right about the time my son was obsessed with snowmen.  A boy notices his snowman doesn't look the same the next day and imagines that it is due to all the fun snowmen have a night while everyone is asleep.  A cute, fun, slightly silly story with a rhyming text.  I like to see how many kids recognize that the snowman looks different because he has started to melt.

Snowbaby Could Not Sleep by Kara LaReau and illustrated by Jim Ishikawa is a relatable story of little Snowbaby who is not ready to go to sleep, and comes up with one excuse after another.  It has repeating lines of "Snowbaby could not, would not, sleep" and "I can't sleep" that the kids can say along with you, as well as counting snowflakes along with Snowbaby.  It ends with a little Snowdoggie to keep Snowbaby company, and everyone gets to sleep.

Snow! Snow! Snow! by Lee Harper is a story told mostly through pictures with little text about a family going sledding down a big, fast hill and ending up airborne, flying through the air with the geese.  But, what goes up, must come down!  Cute, but I think it could use more words to help with the flow of the story.

Mouse's First Snow by Lauren Thompson is a cute, sweet story showing Little Mouse as he experiences snow for the first time along with Poppa.  This story doesn't work quite as well with some groups as the other Mouse's First... stories that are more interactive.

The Activities
First up, a song and accompanying flannel board: 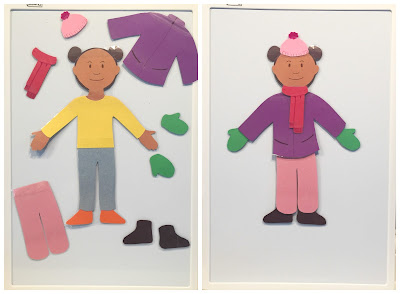 "It Is Snowing"
(to the tune of "Frere Jacques")

Remaining verses:  chest - jacket
legs - snow pants, feet - snow boots
hand - mittens, neck - scarf
Next, a "Five Little Snowmen" rhyme and flannel board, described in a previous "Flannel Friday" post:
First, we did the traditional rhyme with hand motions, accompanied by the flannel board.  We followed that with my game version, where the kids all stand up and are the snowmen, while I am the sun, walking around behind them as we say the rhyme.  Then, when it is time for one to melt, I tap someone on the shoulder to tell them they have to melt (I usually do two at a time to save time).  The kids LOVE this, the suspense of waiting to see if they will be tagged, and the drama of melting.
And for some real fun, an indoor snowball fight!  The "snowballs" are basically giant pom-poms (pictured below).  As I handed the snowballs out we sang "Ten Little Snowballs": 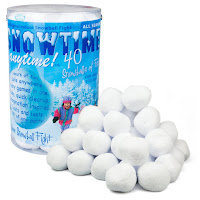 We had a ball with the second two classes, though!  They are older and always well behaved, attentive, and participate.  They had a blast with the snowman game and the snowball fights.  It was cute to see when they would get brave enough to throw them at me, getting a mischievous gleam in their eyes.  I really wish we had been able to give them more time.

The last group did pretty well, too, but because they can get out of control sometimes, I elected not to do the snowball fight or game version of the snowmen and stuck with the traditional flannel boards instead.

All the kids really liked Snowbaby Could Not Sleep, with the repetition and the cute little Snowdoggie at the end, and most enjoyed The Snowy Day and Snowmen At Night, except for the younger kids who had trouble paying attention to anything.  I realized I need to find some short, yet very engaging snow books for these younger classes (this is always a challenge!).  I had a few shorter ones, but they were all rather boring and didn't really engage them.
Posted by Jen at 2:50:00 PM