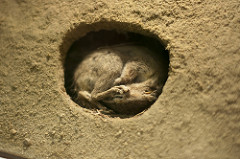 Last year I did a more general "Animals In Winter" storytime, and right now I am in the middle of a 2-week rotation of  "Winter" storytimes with the Storytime Bus, so I decided for my traditional preschool storytime I would do something a little more focused and "science-y" (remember, former biology teacher here) and talk about how animals survive winter by hibernating, migrating, or adapting.  I know these concepts would be a bit over the heads of these kids, but it certainly wouldn't hurt to give them some early exposure to the concepts and vocabulary, either.

We started off with our welcome song, then I explained that we were going to talk about how animals survive in winter.  I asked them how people stay warm in winter, and they promptly said by putting on coats/jackets.  I compared this to how some animals grow a thicker winter coat of fur, and that was an example of "adaptation".  Then I asked if people stayed inside more in the winter, and liked to curl up under warm blankets and sleep, to which some said "yes".  I explained how that was similar to how bears and other animals curl up in their dens and sleep all winter, which is called "hibernation."  Then I asked them if they knew anyone who like to take a vacation in Florida in the winter, and explained that some birds flew south in the winter to stay warm also, and that this was called "migration".  I had them repeat each word as I introduced them.

Then, we did an action rhyme to help quickly reinforce those ideas, and help get them all focused.
"Winter Is Cold" 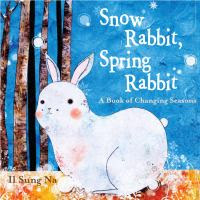 After that, we sang our "story song", which I extended for a couple of extra verses to try to get them to settle down and stay focused.  Then we read our first book, Snow Rabbit, Spring Rabbit by Il Sung Na.  I love this sweet, simple book with it's unique, charming illustrations and how it shows not just hibernation, but migration and adaptation, too.  It is fairly short with a small amount of text, and can be made interactive by letting the kids name the animals.  Most of them are always amazed at how the snowshoe rabbit (technically a hare) changes from white in the winter to brown in the spring.  I also made a point to say whether each one was an example of hibernation, migration, or adaptation.
After that, I showed them a few pictures of other hibernating animals from a non-fiction book, Hibernation by Anita Garneri, including one of a toad buried in the mud.  Then we sang an action song that once again included examples of hibernation, migration, and adaptation:
"Winter's Coming Soon"
(to the tune of "Wheels On The Bus")
The weather's getting cold, so bundle up, bundle up, bundle up.
The weather's getting cold, so bundle up.  Winter's coming soon.
(pretend to wrap coat around yourself) 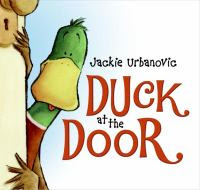 Our next story, Duck At The Door by Jackie Urbanovic, touched on migration, or more accurately, what would happen if a duck didn't migrate and fly south for the winter like he was supposed to?  Max had so much fun in spring and summer, he though he'd like to stay for winter, realizing too late what a mistake that was.  Luckily, Irene and her household of pets took him in for the winter.  I love the picture of the sad, cold, lonely little duck trudging through the snow.  This is a cute funny story, but I do like to use it as an opportunity to reinforce that you do not open the door to strangers, and instead you should go get your grown-up if someone knocks at the door, especially in the middle of the night.  The kids all love the ending when Max returns the next winter, with his whole flock!
I originally had planned another song about hibernation and a third book, Brett Helquist's Bedtime for Bear, but it was obvious at this point that we had all had enough and the kids just couldn't handle anymore today, so we sang our closing song, handed out stickers, and I called it a day.
How It Went
It was clear I had been a bit over-ambitious in my planning for this storytime.  It started off pretty well, but by the second book I was clearly loosing them.  Partly because of the holiday break, but partly because this group just doesn't seem like they are ever going to settle down!  They are the most chatty, wiggly 3-year olds I've ever seen!  I am going to have to re-think my usual planning, and plan for them like they are 2-year olds instead, and stick with songs and rhymes, and just two shorter books and just do interactive books.  It's a shame, because they are missing out on some good stories.

Snow Rabbit, Spring Rabbit was a perfect choice for them and they did very well with it.   They were all amazed at how the snowshoe rabbit could change colors with the seasons, and several said they wished they could do that, too.  I just wish I'd been able to find some other good-but-short & interactive books as well.  They did pretty well with the songs and rhymes, though a few got a little too rambunctious and one little girl purposefully hit another because she had accidentally touched her while flapping her arms with the song, so I had to send her to sit with the teacher.

I just can't get over the difference in behavior and maturity between this 3-year old class and the one with the same classroom and teacher last year.  They are going to be an on-going challenge, I can tell.
Posted by Jen at 2:14:00 PM