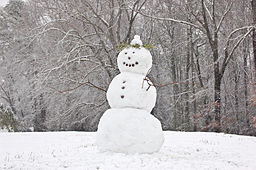 I did a winter themed storytime last December that focused on staying warm in winter, mostly about how animals have adapted to deal with winter by hibernating, storing food, migrating, growing winter coats, etc., wanting to save the focus on snow until January when we typically get it in this area.  The timing worked out perfectly!  We had a fairly big snow (for our area) the weekend before, so by the time I did this storytime, the kids had had a chance to experience snow and it was still on the ground.

We started with our opening welcome song, then talked about the snow and all the fun things you can do in the snow. Of course they were all very eager to talk about the fun they had playing in the recent snow.  After that, we transitioned into the first book by singing our "story song". 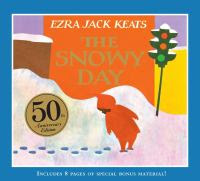 For our first book, I chose a classic, The Snowy Day by Ezra Jack Keats.  I was going to use my childhood copy, but when I dug it out it was not in the greatest condition after going through 5 kids, so I opted for the 50th Anniversary special edition instead since it is bigger than the standard book.  This book has a simple sweet story of a boy exploring his snow-covered surroundings.  I chose this partly for nostalgia, but also because it features an African-American child, and I like to see if the children can predict what will happen when Peter whacks the snow-covered tree with a big stick, or if they can figure out what happened to the snowball in his pocket.

After that, a simple song that would give them a chance for some movement.


"Dance Like Snowflakes"
(to the tune of "Are You Sleeping") 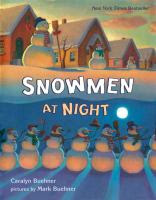 The onto some silly, snowman fun with Caralyn Buehner's Snowmen At Night.  This is a fun book that poses the question, "What do snowmen do at night?" after a boy notices his snowmen always look different the next day.  It has rhyming verses and a good rhythm, plus charming illustrations depicting the goings-on the boy imagines.  I chose this because its fun, and I like to see if the kids can tell me the real reason the snowmen look different the very next day.

Next we did a "Five Little Snowmen" rhyme with a magnetic board and snowmen and puddles I drew using the "shapes" tool in MS Publisher, inspired by the one on Miss Mary Liberry.  For a complete description with rhyme, more photos, directions, and printable files, see my Flannel Friday: "Five Little Snowmen" post. 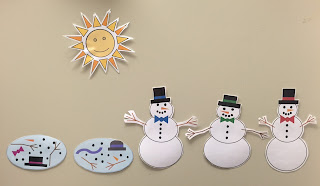 The night before my storytime I had a sudden inspiration to turn this rhyme into a game, by having the children pretend to be the snowmen and me being the sun, and tapping them on the shoulder to tell them it was their turn to melt.  So first we did it the traditional way, then followed that by the "game" version.  This turned out to be a lot of fun! For our third and last story we read In The Snow by Sharon Phillips Denslow, illustrated by Nancy Tafuri.  I liked the idea of doing a book that showed different animal tracks in the snow, and I thought this one did the best job of showing different animal tracks with simple pictures and text that were suitable for this age group.  After that, we finished up by singing our regular closing song.

How It Went
I had about 10 kids and it was a very good thing I had planned on doing "Snow" today, because after our recent snowstorm, that is all they wanted to talk about!  They were so excited about the snow, which kept them engaged, if a bit talkative.

They liked all the stories, and I was pleasantly surprised that several figured out what happened to Peter's snowball and some even recognized that the snowmen looked different the next day because of melting.  The kids were amazed when I told them that *I* had read The Snowy Day when I was their age.

This was the first time I had ever used any kind of storyboard with them, and they were very intrigued by the "Five Little Snowmen" board.  They absolutely LOVED when I turned it into a game, giggling at the suspense of who would be tagged to melt next!  I highly recommend trying it this way if you have the space.  I was a little surprised that they didn't get into dancing around like snowflakes with "Dance Like Snowflakes"; I had thought they would really enjoy twirling around like floating snowflakes, but they were very lackluster about it.
Posted by Jen at 4:41:00 PM