Election Day At The Library 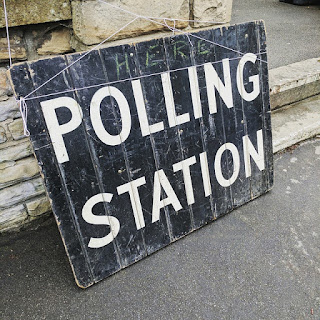 Election Day proved to be a very long and very busy day. I am currently part-time, so I usually just work a 4-hour shift, but since one of my colleagues was away at a conference I also worked the morning shift and covered her toddler storytime.

The day started off fairly quiet for the first hour, but then as it got closer to storytime families started pouring in, and with school being out for election day, they also had older siblings in tow. I had a pretty big crowd for storytime, and it went pretty well, especially considering we had to have it out in the open area of the department rather the meeting room. Unfortunately, we do not have a dedicated program room, and the meeting room was being used for voting as the library is a polling place. Having storytime out in the open means there is a lot more noise from older kids playing around us, and a whole lot more distractions. But despite that all that, I think it went okay. 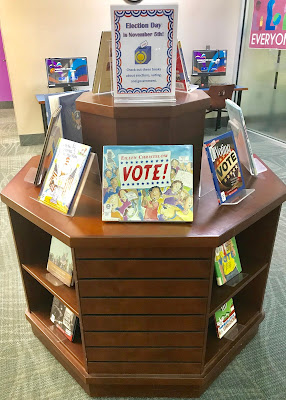 With it being a storytime day, school being out, and the library being a polling place, I knew we would have lots of families with kids in and out all day, so I did a couple of special election-related things. First, I set up a display with election-related books. I pulled both fiction and non-fiction, including books that had anything to do with elections, voting, voting rights, and a few general government books to fill in if we started running out. Some of the books were from the election picture book bibliography I put together a few years ago, but I also included books for older readers and chapter books.

Then I set up a simple little "election" for the kids to vote on. We did this last year with a more complicated ballot that had three different races to vote on, to more closely mirror the real election, but the kids found it very confusing and most just couldn't understand the concept of voting on three different things. So this year I kept it very simple, and instead of labeling it as a race for a government office, I just put it as "pick your favorite character". 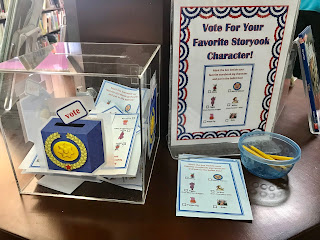 Rather than picking a random assortment of fictional characters, I thought it would be easier to narrow it to one type of character. My first thought was to pick your favorite cat or dog character, because there are several of either, but then I've seen that done several times, and realized there were probably more well-known pig characters than either cat or dog, so I went with favorite pig character.

[Only later did it occur to me that people might think I was making some kind of commentary about the real-life candidates, but I swear that was not my intent at all!]

I made up a simple ballot with 6 characters, including name and image, with instructions to mark their favorite and then put the ballot in the ballot box, and set up a polling area with a flyer, ballot box, ballots, and pencils.

I don't think the younger kids participated as much as I would have liked, since they didn't quite understand the whole thing as well as the older kids, and couldn't really do it by themselves. I meant to announce it in storytime, but of course forgot. Though I did try to point it out to as many people as possible, it seemed that many just didn't want to bother. However, I did get fairly good participation from the older kids who could read and do it on their own. I even had several stop playing and rush to get in line to vote just before 5:00pm when I announced the poll was about to close.

The results were a bit surprising, and I think reflect the greater participation by the school-aged kids. We had a total of 56 votes, with a narrow margin of only ONE vote separating the top two candidates: 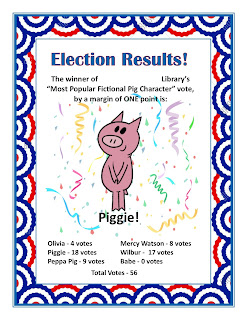 I really didn't expect Wilbur to get that many votes, and thought Peppa would get more. I made a flyer with the results to post in the department for the kids to see.

Though there was a bit of a lull in the middle of the day, it got super busy later in the afternoon, and I was run ragged with helping people find things, checkout, answering questions, etc. I was getting a bit stressed because I could see that toys were getting everywhere, display and face-outs were being emptied, shelves were a wreck, rejected books lying everywhere, but I was so busy assisting customers, I just didn't have a spare minute to do any straightening up like I normally do, since I was on my own due to being short-staffed with one colleague at a conference,  another unexpectedly having to take off due to a family emergency.

I finally got someone from circ to cover so I could take a quick break, but even then it still took me 10 minutes to get away once she came back because people kept asking me for help. Finally, I got a quick break, and after that things slowed down enough that I had a chance to quickly do some cleaning up in the last few minutes before I left. I always try to straighten up periodically during my shift, and especially at the end because I don't like to leave a mess for the next person to have to deal with. All in all, it was a good day; just very, very busy!

After work I went straight home, grabbed a quick bite, and took a hot shower and a well-deserved nap!

Email ThisBlogThis!Share to TwitterShare to FacebookShare to Pinterest
Labels: Other Programs, Passive Programming