April 28th in National Superhero Day, and though I've never really been a fan of the whole superhero genre, I know a lot of people are so thought it would be good for a storytime theme. However, I did find it surprisingly challenging to find superhero books suitable for storytime that I liked. I was still trying to decide on books up until that morning, when luckily two holds came in just in time.

I started off with our hello song, then introduced the topic. I asked the audience if they had a favorite superhero and if they could have any superpower they wanted, what would it be? I encouraged them to give their responses in the comments, but as usual, did not get any. Next, I said we were going to get ready by pretending to be superheroes with a quick rhyme (borrowed from Lindsey and Dana at Jbrary), acting out the motions: 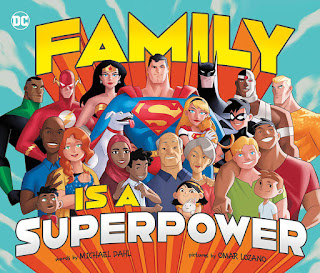 I followed that with my lead-in song and the first book, Family Is a Superpower by Michael Dahl and Omar Lozano. I was so glad when this book came in at the last minute, because it was perfect for storytime. The text is short and simple, it has diverse characters, and has a great message about family. I also liked that it had some of the recognizable comic superheroes, but wasn't only about them.
The presence of the superheroes also gives the subtle message that friends can be like family, too. I made it a little less subtle by pointing it out and saying the sometimes friends are like family, and family can be anyone who cares about each other.
I followed this with a another rhyme I borrowed from Jbrary that I made even more fun by adding a visual element, using laminated clip-art with my magnetic white board. I modified it slightly by choosing kid versions of superheroes and adding the word "little" to the rhyme to make them more relatable to young children, and changed the work "fly" to fight, and the last line from flying up, up, and away to chasing the villain away, since not all the heroes shown have flying as a superpower. 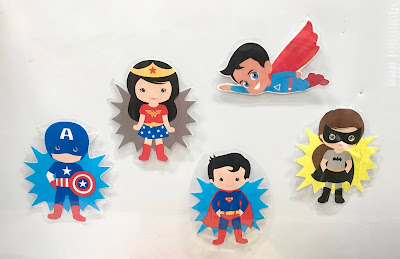 Five Little Superheroes
Five little superheroes ready to fight.
Here comes the villain; Stop that guy!
This superhero can save the day.
Off he/she goes, and takes the villain away! 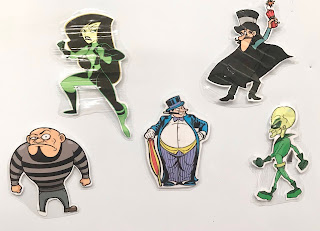 I also had five different villains (some from the comics, some generic, chosen somewhat at random due to my lack of knowledge of superhero lore and lack of time to research it). I started with all five heroes on the board, then as I said the second line of the rhyme, I would put one of the villains on the board, and end with one of the heroes taking the villain away. 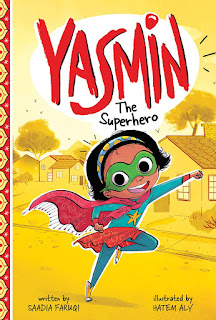 For the second book, I decided to try something a little different, that I've never done before. The other book that came in at the last minute was Yasmin the Superhero by Saadia Faruqi and Hatem Aly. I love, love, love the Yasmin books for many reasons, and really wanted to promote them and use this opportunity to provide some exposure to a culture that is not often represented in children's books.
However, they are early readers/transitional chapter books, so longer and text-heavy compared to a picture book, plus my storytimes have been running too long for a virtual format anyway. So, I decided to just read the first chapter as an introduction, kind of a teaser, and encourage people to check out the book to learn the rest of the story. In that first chapter, we see Yasmin has an extended family, calls her grandparents "Nani" and "Nana", and learn what a dupatta is when her Nani lends it to Yasmin to use as a cape. If you don't have these books in your collection, I strongly recommend you add them!
I ended with encouraging families to visit the library to check out more books, and briefly showed a few of the other superhero books from my display, and closed with a good-bye song.
How It Went
I wish there were more superhero books that were suitable for storytime, I felt like I didn't have a lot of great choices. But I was happy with the ones I used, and thought the two rhymes were fun, and would have gone over well if I'd had a live audience. But once again, though Facebook showed I had gotten views, there were no comments or reactions from patrons. It's getting harder and harder to be motivated to put much effort into these virtual storytimes without getting any feedback at all.

I am doing two storytimes in May, then taking a break the last half of the month to get caught up from taking vacation in the middle, and to get ready for our summer program. I am still debating on what to do for the summer. We have lots of centralized, system-wide programs going out, including a weekly virtual storytime, so I feel like my weekly virtual storytime is redundant. I have been toying with trying outdoor in-person storytimes instead, or maybe just using that time to do some type of outreach.
I need to make up my mind by the end of the week, but I find it so hard to plan with the Covid situation constantly changing in my area. Just when we think things are getting better and we can think about in-person programming, the numbers spike again. Also, our usual summer reading program was scrapped at the ninth hour and replaced by a completely different program that still doesn't have all the details worked out and will likely generate more chaos and a greater workload than the previous one, so I feel I need to save my time for that.
Posted by Jen at 2:01:00 PM