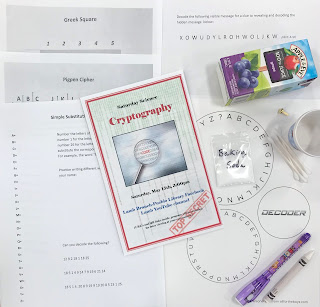 For May's STEM program I decided to repeat a program I'd previously done in-person ("Spy School") with some tweaking to adapt it to a take-home kit plus video format, focusing only on the hidden and coded messages part and re-branding it as a Cryptography program. I chose this program because I knew it would be a little easier and less time-consuming to prep and a fairly short and quick video to record since I was going to be gone a week for vacation, and preparing for the summer was going to be hectic.

This program was intended for ages 6-12, and as the other STEM programs I've done lately was a hybrid program, with a take-home kit of supplies coupled with a video presentation.

Additional Materials Needed:
Activity #1 - Hidden Messages
Activity #2 - Secret Codes
For each code I gave them a sheet that explained how the code works and gave a one or two word example. Then they were asked to encode a few different words as practice, and decode a short message.
Activity #3 - Ultimate Challenge
For the challenge, I gave them a coded message that when decoded would tell them how to reveal the hidden message, which would also have to be decoded.
These were all done using codes and techniques covered, so they had everything needed to complete the challenge. I wrote the first message with an alphabet substitution code using the DIY decoder wheel, and gave them the hint that "A=D". When decoded, the first message says "ultraviolet light". This lets them know to use the UV light on their spy pens to reveal the hidden message I had written in UV reflective invisible ink using one of the pens. The hidden message was encoded using the Pigpen Cipher, and when decoded says "summer reading starts June first".

I closed by encouraging the audience to further explore the subjects of cryptography and espionage, and showed of few book suggestions, including an excellent book on the subject of codes and cyphers that I used in preparing for this program originally, Top Secret: A Handbook of Codes, Ciphers, and Secret Writing by Paul B. Janecszko (2004), as well as a book about Sioux code-talkers from WWII, a non-fiction book about the tools and techniques of espionage, the biography of a spy, and a fiction series (there was a more complete list in the included instructional brochure, as well).

How It Went
This worked really well for take & make kit, and was really inexpensive except for the spy pens. I wish I'd had the time and creative energy to make the messages they decoded a little more fun and somehow build on each other, but I was really pressed for time.

I was tempted to make one of the messages say "Be sure to drink your Ovaltine", but I figured few people would get the reference to poor Ralphie's disappointing coded message from the Little Orphan Annie radio show in the classic film A Christmas Story.

This will likely be the last take-home kit I do, at least for a while. The youth services department at the main library is doing centralized programming for the summer that will include a weekly animal program that is more "science-y" (as well as weekly storytime craft kits), so I am taking a break from planning take-home kits and focusing on outdoor, in-person programming for the summer, with the hope we will be able to return to normal indoor programming in the fall.

I may still occasionally do a take-home kit, or package any leftover supplies from in-person programs as take-home kits, but they won't be as elaborate as what I've done during the pandemic.
Posted by Jen at 1:41:00 PM