My storytime happened to fall on May 5th, plus May is Latino Book Month, and since half our population is of Mexican American heritage I decided to do a Cinco do Mayo theme. First I did a little research to be sure I understood what the holiday was for and how it is celebrated, and since frustratingly none of our several books about Cinco de Mayo appeared to be written by Mexican or Mexican American authors I had to come up with a slightly different way to interpret the theme as I only wanted to use books by Latino authors.

Instead of reading stories about Cinco de Mayo, I talked a little about the holiday. First I explained it was Spanish for May 5th (literally 5th of May), and that though many mistakenly believe it is a celebration of Mexican Independence, it is actually a celebration of a battle that took place about 40 years after Mexico won its independence from Spain. In 1862 the French invaded Mexico and were marching to Mexico City when they were defeated in battle near the small town of Puebla (we happen to be in a town called Pueblo, so I liked that connection, too).

I then explained that in Mexico, this day is celebrated as a remembrance of that battle and victory, but that in the U. S. is has come to have a broader meaning and often observed as a celebration of Mexican heritage, with traditional Mexican foods, dances, music and other cultural traditions. I mentioned that in that vein, today's stories would be by Mexican American authors and celebrate Mexican culture, including some activities that one might do in celebrating Cinco de Mayo. 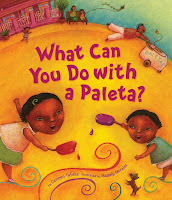 After our lead-in song, I read What Can You Do With a Paleta? by Carmen Tafolla and Magala Morales (winner of the Tomás Rivera Mexican American Children's Book Award). I led into this by explaining that paletas were Mexican ice pops made with fresh ingredients, in all kinds of creative flavors and combinations, and that enjoying paletas would be something you might enjoy during a Cinco de Mayo celebration.

This book has a simple, charming text that portrays neighbors in the barrio enjoying ice pops from the paleta cart. The child narrating the story shows several imaginative things one can do while enjoying a fresh, delicious paleta. I must admit, I don't particularly care for the illustrations.

Following the story, I mentioned that making fresh homemade paletas might be something you would enjoy doing as a family at home, and if so, we happened to have a cookbook with all kinds of recipes in traditional and unexpected flavors, Paletas: Authentic Recipes for Mexican Ice Pops, Shaved Ice & Aguas Frescas by Fany Gerson. One slight caveat, it is an adult cookbook, so a few of the recipes do contain alcohol.

I segued to next activity by saying we were going to do a counting song in Spanish, and first went over the numbers 1 through 10 in English and in Spanish, and since making new friends was one of the things our story said one could do with a paleta, we would count friends, which was amigos in Spanish, and that "I have" was tengo in Spanish.

Normally I would do a second verse counting down from 10 to 1, but the idea of counting down and losing friends one-by-one just didn't seem like a good idea. 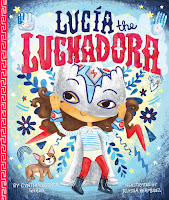 I couldn't really find a suitable book about other celebratory aspects such a food, dance, or music, but the second book was about something uniquely Mexican, the dramatic performance wrestling knows as the lucha libre.

In Lucía the Luchadora by Cynthia Leonor Garza and Alyssa Bermudez, the main character loves playing superhero, but becomes upset when the boys say that girls can't be superheros. Her abuela comes to the rescue with a story about the luchadores of lucha libre and a shiny, silvery cape and mask.

I closed with announcements about the upcoming 3-week break from storytime to prepare for summer, the early literacy take-home kits with a piñata craft, and a good-bye song.

As always with these virtual programs, I got some views, but no engagement or interaction in the comments, so don't think any families are really watching. I don't really blame them; there is so much content on the internet that has much better production quality and I just don't think kids can really engage this way. Lucía the Luchadora is a fun read-aloud as it has lots of action and you can be fairly dramatic; I did not enjoy What Can You Do with a Paleta as much, but it's okay.

Thankfully, I *think* I am almost done with virtual storytime! I have one more, then I'm taking a 3-week break to get caught up from being on vacation and prepare for summer, then I'm going to try in-person, outdoor storytimes for the summer. We have a nice little greenspace with plenty of shade once the trees finish leafing out (spring comes late here). Then, I'm really, really hoping that in the fall we can go back to regular, in-person programming in the building.