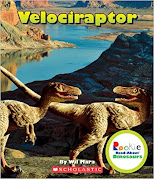 I continued the "Velociraptor Appreciation Day" (April 18th) theme into my storytime for the following week, since I had come across a new book I really wanted to use, and an older one I hadn't seen before that I really like. Plus, let's be honest, I love dinosaurs as much as the kids do.After a hello song, I introduced the theme using a non-fiction book, Velociraptor by Wil Mara, to tell a few facts about velociraptors and show relative size and what scientists think they looked like. These "Rookie" readers are perfect non-fiction books for storytime and younger kids. 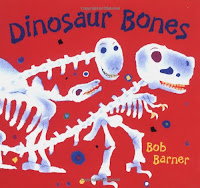 I led into the next book by explaining that no one knows for sure what dinosaurs looked like since they are extinct, but that scientists can theorize what they were like by studying their fossilized remains. Dinosaur Bones by Bob Barner is the perfect book to introduce paleontology to young kids.
It's actually two books in one; across the top of the pages is a sparse rhyming simple text written in a large colorful font that is just right for toddlers and young preschoolers, but at the bottom is more detailed information that would be good for older kids, or when reading one-on-one. It's like a picture book and a non-fiction book in one, with bright, colorful illustrations depicting both skeletons and the dinosaurs they came from.
Next I did one of my favorite storytime songs/flannels, "Five Little Dinosaurs", though it wasn't nearly as fun without a live audience there to interact with. 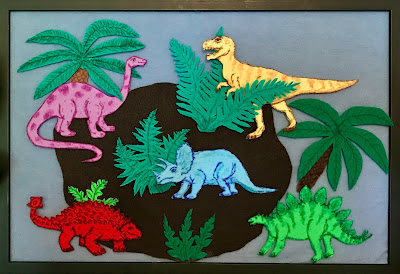 "Five Little Dinosaurs"
(to the tune of "Five Little Ducks Went Out to Play")
One little dinosaur went out to play,
Out in a giant swamp (or the giant ferns) one day.
He (she) had such enormous fun,
He (she) called for another dinosaur to come.
"Oh, diiiiinosaur!"
[continue to the fifth dinosaur]
Five little dinosaurs went out to play,
Out in a giant swamp one day.
They had such enormous fun,
They played all day, til the day was done.
(Spoken) And then the mommy and daddy dinosaurs called,
"Oh, little diiiinosaurs! Time to come home!"
[Remove dinosaurs one by one]
When I do this one, I tell the audience to help call the next dinosaur, and pat their thighs with their hand to sound like the dinosaur running to play. I followed this with the lead-in song I usually use at the beginning, but didn't today since the first book was more of an informational book that a story, and I had transitioned to it by talking about how we know about dinosaurs instead. 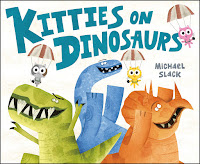 The next book was a relatively new book that is super silly, and combines two of my favorite things, kittens and dinosaurs! In Michael Slack's Kitties On Dinosaurs, the adventurous kittens have climbed and explored everything possible on Kittie Island and are bored. So, they sail off to Dinosaur Island in their amphibious litter-mobile to climb the dinosaurs, despite the narrator's strong warnings.
Their first plan doesn't work, so they go to 'Plan B', then 'Plan C', and finally 'Plan D' (no one ever has a 'Plan D"!). Will the kittens survive, or become dino snacks as the narrator fears? Very fun and expressive, a great read-aloud. 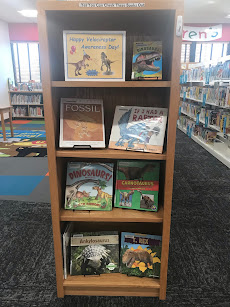 I ended by encouraging families to come to the library and check out more informational or story books on dinosaurs from our display and showed a few examples, then closed with a goodbye song.
How It Went
Got some views on Facebook, but again, no engagement with comments or reactions. For once, I was glad not many watch it as I had a major slip of the tongue when reading Kitties On Dinosaurs. The line was supposed to be "tough cookies, kitties", but "kitties" is not what came out of my mouth! 😖😳 I quickly corrected myself, but I still said it. Whoops!

What's your most memorable slip of the tongue?
Posted by Jen at 1:15:00 PM