Today is National Frog Jumping Day! And it has a literary connection, being named in honor of all the frog-jumping contests spawned by Mark Twain's short story "The Celebrated Jumping Frog of Calaveras County" (originally published as "Jim Smiley and His Jumping Frog"). I've always found frogs to be a fun storytime theme, so decided this was a good reason to do it again.

I was joined by my frog puppet friend Freddy as I greeted viewers, sang a hello song, and introduced the topic. Then I brought out a non-fiction book, explaining that non-fiction books were full of information and interesting facts rather than stories, and were a great way to learn new words and more about the world, and that the more words they know and the more they know about the world, the easier it will be to learn to read later.

I used the book to briefly explain how frogs undergo metamorphosis, and showed the photos illustrating how the frog goes from egg, to a water-breathing tadpole with gills, to a tadpole sprouting back legs, then front legs, and finally to an air-breathing adult with 4 legs, no tail, and lungs. I also explained that frogs were amphibians, which means they live in water for part of their life cycle, and on land for part of their life cycle (but generally stay near water). 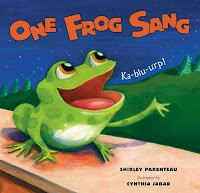 After a lead-in song I read an older-but-new-to-me frog counting book, One Frog Sang by Shirley Parenteau and Cynthia Jabar. I really liked this because it shows how there are many different kinds of frogs of different sizes, colors, and patterns, and that they make very different sounds and don't all say "ribbit".

The various sounds are of course fun for the kids to say, and we know making animal sounds is great for phonologic awareness. The various frog sounds are also emphasized with a larger font which contributes to print awareness and letter knowledge. 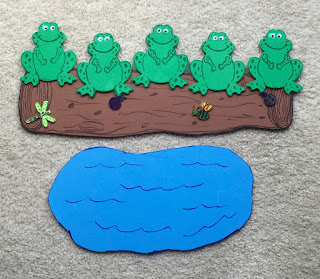 Five Green & Speckled Frogs
Five green and speckled frogs,
Sitting on a speckled log,
Eating the most delicious bugs - YUM, YUM!
One jumped into the pool - SPLASH!
Where it was nice and cool.
Now there are four green speckled frogs - RIBBIT, RIBBIT!
(continue counting down until there are no green speckled frogs)
I didn't have room on my small board for the pool, so I showed it to the camera and then put it on top of the table below. 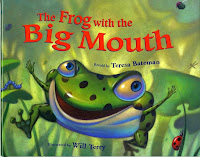 For the second book I choose one I've used before. The Frog With the Big Mouth by Teresa Bateman and Will Terry is a re-telling of an old folktale, with this version being set in South America.
Though it doesn't have cool pop-up's like Faulkner and Lambert's more well-known version, I really like the alternative setting that introduces children to several animals they may not have heard of before, like the toucan, coati, and capybara. It is also fun to read aloud as the little frog brags about eating an enormous fly over and over, trying to find someone who will be impressed. 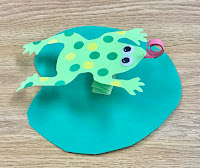 I closed with reminding them of this month's early literacy kit, which contains the words to "Five Green & Speckled Frogs", five die-cut frogs with dot stickers to speckle them with, and the bouncy frog craft pictured, among other things.
I also reminded them of the following 3-week break from storytime, after which we would return to in-person storytimes outside on the lawn. Then Freddy and I sang a goodbye song and waved good-bye.

I have to confess, I do not enjoy virtual programming at all. Between the technical challenges and limitations and the lack of interaction, I find it very unsatisfying and sometimes I wonder if it's just a waste of time. But at the very least it has kept me in practice somewhat. I so look forward to seeing some kiddos and families in person!
Posted by Jen at 1:19:00 PM